Conformity and Manipulation: The American Virtues 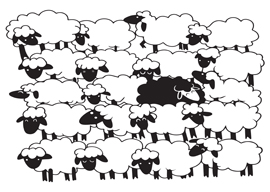 “My biggest flaw and strength,” says James Damore, “may be that I see things very differently than normal.” This simple sentence reveals the essence of our fraying social fabric. For Damore’s “strength”—his rare ability to think for himself and exercise independent judgment—naturally leads to conflict with the majority, who, in their stupidity and weakness, must deem his virtue a “flaw,” a sign that he is not “normal.” For most people—those bundles of herd affect—“truth,” as they can understand it, is nothing but a means for their personal interests, which are mostly material and, beyond that, trivial. Hence their utter inability to understand a man like James Damore and their natural disdain for any principled truth-teller.

The former chess prodigy is now blacklisted from the big tech companies, despite having, in the language of the corporate rabble, a proven track record of success as a software engineer. In the Guardian article from which I have quoted, we learn that Damore was diagnosed with a mild form of autism in his mid-20s. Paul Lewis, the liberal author of this subtle hatchet job, based—where else—in San Francisco, describes Damore’s first failure to submit to the diversity idol.

Like academia in general, Harvard is such a touchy, genteel environment that one can hardly sneeze without offending some Last Man and his intersectional master formerly known as a woman. This is why so many comedians will not go near our humorless colleges and universities. Masturbation has been a subject of comedy from Diogenes the Cynic up through Chris Rock. The belief that Damore’s so-called autism had anything to do with the playful incident is ludicrous. But it does reveal the conformity that is now de rigueur in this country, since otherwise the fools, frauds, and cowards in charge could not manipulate us so well.

“Democracy by its very nature elevates what is inferior, even as it suppresses what is fine.”

Unfortunately for him, Damore himself, for all his gifts, is evidently unaware of the actual nature of his situation. Notwithstanding his admirable opposition to Google, after a point he simply assumes that his abasement is “normal.” How very like a millennial “man.” “Damore’s girlfriend,” says Lewis, “has agreed to meet only after being assured that, like her, I disagree with her boyfriend’s views.” I’ve followed the Google memo controversy closely and written about it at length on The Unz Review and New English Review. So I can tell you that, with few exceptions, the credible scholars who have addressed the issue—including such eminences as Jordan Peterson, Geoffrey Miller, and Debra Soh—have all confirmed that Damore’s opinions on gender differences in the workplace are quite sound, being supported by abundant research. Most who disagree with Damore are, of course, feminists, whose criticisms, the close reader will perceive, are motivated by that anxious resentment that drives feminism as such. So, even though the truth is on his side, Damore has a girlfriend—an avowed feminist and fellow techie—who doesn’t share his nonconformist views and who “does not want to be identified or directly quoted,” being “keen to remain in the shadows.” Although this seems prudent, a sensible desire to protect her professional interests, like the callow unwillingness to meet with a diversity dissenter, it is not a good sign for Damore that his girlfriend does not stand by him, though certainly it is just what we should expect from a millennial American woman (if that she is—I suspect so). Nor does it look good for him that, as we read in the article, the couple take care not to discuss the memo. I would submit that Damore should get his girlfriend to understand that he is right on the issue, not her, and if she is not willing to defer to his superior judgment, then he should drop her immediately, because as it is, this relationship cannot go well. In the old days, of course, a young man could count on an older man to give him such sage advice. But like feminine grace, a man’s ability to defend himself and his family (rather than calling on another man to do so), and even common courtesy, are vanishing from our culture of progressive confusion.

To be sure, it is now very difficult for people to understand the conformity and manipulation that lie behind America’s constant pseudo-moral show. And it is especially challenging for men. From childhood on, the American male is made to become a docile and compliant worker bee—that is his “normal.” The yuppifed and feminized culture’s attitude toward masculinity shows itself in the forms of attention deficit disorder, oppositional defiant disorder, and psychiatry’s other sham metaphors that function to make one an obsequious slave to greedy liars and sanctimonious prigs. It is their pretend values that matter. To be a “good person” in 21st-century America, you must be a base dissembler, very eager and happy to carry out all sorts of meaningless and degrading tasks. The person who finds this dreadful may pass from Ritalin in youth to Prozac in adulthood. To be honest and principled, he learns, is professional suicide.

Thus, Denise Young, Apple’s former diversity chief, was recently obliged to step down after just six months on the job. “There can be 12 white, blue-eyed, blond men in a room,” she had dared to say, “and they’re going to be diverse too because they’re going to bring a different life experience and life perspective to the conversation.” For “diversity is the human experience,” and as such, should not be “tagged to the people of color, or the women, or the LGBT.” Since most Americans are now as stupid as they are wicked, these accurate words naturally prompted a furor, which was not mitigated by the fact that Young is a black woman. Like National Review, which fired the politically incorrect John Derbyshire, Apple is gutless and all about lucre.

What company is any better today? Consider these words from a job ad on Craigslist.

Paoli Y2 Academy is looking for tutors to prepare high school students for the ACT and SAT. The qualified candidate will be experienced teachers from distinguished private to public teachers and have efficient SAT scores. Applicants should be enthusiastic, passionate, and love teaching high school students. With over 5 years of experience, Y2 Academy has developed a successful system to help students maximize their SAT, PSAT, and ACT scores. We offer a guaranteed competitive wage plus great incentive.

More importantly, we’d like to give each student a vision and a purpose in life. We believe by achieving the ideal goals of each students score, they will have more opportunities in life. Developing a strong foundation, discipline, and the passion for their craft will not only help them to be successful, but most importantly have happiness. We hope to see each student find victory and confidence within themselves.