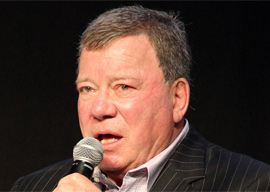 Writing on Twitter”which, for better or worse, is the closest the public has to an agora these days”Shatner was responding to some foo-foo pseudo-academic essay regarding what Star Trek‘s Captain Kirk character can teach us about gender equality in a postmodern/post-gender society, or something like that, because I have to confess I didn”t read the article and would frankly rather have long knitting needles shoved forcefully through my ears than ever have to read, or even ponder the existence of, such an article again. Apparently the term “toxic masculinity” reared its stinky head in the article, to which Shatner responded:

Feminism is great but terms like toxic masculinity are degrading. It borders on that imaginary concept to feminists: misandry.

This toxic idea that Shatner shat out chafed the ample thighs of one Mari Brighe, a dude who thinks he’s a woman and who’s pursuing a career agitating for the imaginary “rights” that he imagines are being denied to the people who share his delusion. Mari”again, a white dude who for some reason has taken it upon himself to speak for white and nonwhite women against white-male pathologies”denied that “misandry” even exists:

“Feminism is great except that part where it criticized men.”

“Misandry is real, and those who seek to deny or justify it deserve a stern paddling.”

“Misandry is about as real as Klingons, Bill.”

All things being equal, I would say the idea that Mari Brighe is a woman is roughly as real as Klingons. On the other hand, I think “misandry””a generalized hatred for and/or disparagement of males as a group”is as real as testicle cancer. Brighe also called misandry a “myth”:

Misogyny is a systemic violence that kills & oppresses women. ‘Misandry’ is a myth derived from men’s hurt feelings. #MasculinitySoFragile

Again, I”ll get called all manner of naughty names for noticing this, but I would say that despite William Shatner’s infamous slimming girdles and his multi-decade use of reality-defying toupees, his masculinity might be a little less fragile than that of a dude who insists he’s a chick.

On a girls-writing-for-girls website called The Mary Sue, a certain Teresa Jusino”who, according to false rumors, once auditioned to play a planet in a Star Trek movie”lamented that Shatner’s comments were “disappointingly sexist” because as everyone except the rape apologists knows, women can”t be hateful toward men, but even if they can, the men and the patriarchal structure that supports them deserve all the hate they have coming, and more. The huge-in-every-way supporter of women’s rights compared allegations of “misandry” to the idea of “reverse racism,” which, as everyone except rapists and KKK members will admit, doesn”t exist.
When another Twitter user noted that he”d never seen a feminist say anything positive about masculinity, Shatner countered:

I disagree. The original feminist movement was about equality. Somewhere along the line a few decided differently. They are the exceptions.

I agree with the first part of that statement. But poisoned by the evil demon elixir testosterone, I vehemently lash out in the most masculine manner possible to disagree with the latter sentiment”in modern feminism, the man-haters are no longer the exception. They are the rule.