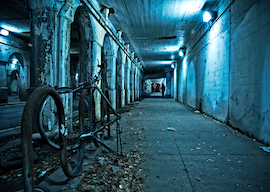 Last month Splinter published an article that exposed the leaked emails of some conservatives who between them had worked for the Institute for Humane Studies, the Intercollegiate Studies Institute, and the Daily Caller. A week later, Timothy Carney, the commentary editor at the Washington Examiner and a visiting fellow at the American Enterprise Institute, published an article that is representative of the general conservative cluelessness with respect to matters of race. The leaked emails contained some racist remarks, but though they’re the work of only a few people, Carney thinks there is a racism epidemic on the right. According to Carney,

What’s needed is not mere “outreach” to black, Hispanic, or Jewish voters. Conservatives ought to make elevation of African Americans, immigrants, and religious minorities so central to conservatism that all dedicated racists will be thoroughly repelled. If we can’t make them stop calling themselves the “alt-right,” because they won’t want to be associated with us, we can at least disgust them with such a focus.

Elevation? And yet I’d thought there’s already enough worship of “victim” groups in this country!

Of course, neither outreach to nor elevation of these groups is desirable. To begin with, people who want to be racist, or on the alt-right, are going to be so in any event, and assigning some special status to blacks and others would do nothing but bring over to the right a distinctly left-wing problem: the conflicts that inevitably arise from the assumption that one is entitled to things because of one’s “oppressed” identity. It is this assumption that has made the left so comically self-defeating, feminists, gays, trans persons, and other querulous types all being in a mad race to win victimization goodies. This affair finds these groups more and more at odds with one another, and there’s no sign that this is going to change.

A man who, like Carney, considers himself a conservative should understand that in order for democracy to work, you need what Rousseau called “the General Will,” that is, shared values and ends. Democracy is difficult, and in some cases impossible, to the extent that a society is large and pluralist, or “diverse.” In Max Weber’s words, “the various value spheres of the world stand in irreconcilable conflict with each other.” Nor are argument and debate much help here, for in most cases, where there is not a General Will that people can take for granted, argument and debate function as tools of incoherence and manipulation, albeit often unwittingly.

Conservatives have long valued cultural homogeneity; after all, it mitigates the intractable conflicts about value that characterize our time. Carney, however, doesn’t grasp that putting more competing groups under the conservative tent would serve only to further complicate (and perhaps indeed undermine) a vexed movement, which already has its work cut out for itself trying to defeat the culturally dominant left.

I rather doubt that Carney even knows what he means by elevation in regard to “African Americans, immigrants, and religious minorities.” Precisely how should these groups be elevated? Of what would this elevation consist? Carney doesn’t tell us. Nor is that a wonder. Men like him write in the service of their vague and shallow moral sentiments. Their syntactically correct sentences obscure the fact that they use words without knowing what they mean, and that they write without seriously considering the implications of their ideas.

“For what it’s worth,” says Carney, “[John] Elliott [one of the conservatives involved in the scandal] apologized for the emails and said he no longer believes those things. I pray that’s sincere.” Does Carney think his readers are as fake as he is, that they’d really believe he prays about Elliott’s sincerity? If Carney prays for anything, it should be for an editor. Reading his article, I was reminded of A.E. Housman’s savage put-down: “This method answers the purpose for which it was devised: it saves lazy editors from working and stupid editors from thinking. But somebody has to pay the price, and that somebody is the author.”

“Carney may think he is ‘fighting the good fight,’ but in reality, his ill-considered views can only harm the conservative cause.”

Carney is like any number of lefties in that he leaps from group differences in income and in well-being generally to the false claim that these differences entail discrimination, so that somebody has to be blamed. Here, it is worth quoting Carney at length:

Conservatives don’t give it enough attention, but one of the greatest evils in the U.S. today is rank racial inequality. The median income of African Americans is below $31,000, which is less than half the median income of white Americans. More blacks are imprisoned in America than are whites, even though there are nearly five white people here for every black person.

There are a thousand points of data like this, all confirming that being an African American means living with the odds stacked against you.

[Things] in the U.S. still aren’t fair and can be improved. And if the game is rigged so badly in the U.S. that thousands of young men are shot on the streets of Chicago, that tens of thousands of black babies are aborted every year, that hundreds of thousands are born out of wedlock, then isn’t that a crisis that deserves attention?

Conservatives ought to make it a priority to fight for the fundamental dignity and equality of racial minorities who have been denied that dignity and equality. It will require overcoming decades of injustice, and so won’t happen quickly. We won’t disabuse the Left of their self-satisfied smears and conceits, but that’s not the point. Conservatives will be able to take solace in the fact that we’re fighting the good fight and pissing off the racists.

See what Carney has done in his lazy moralism? Yes, there is “racial inequality” in the U.S., but it doesn’t follow from this fact that “racial minorities” “have been denied…dignity and equality.” Carney may think he is “fighting the good fight,” but in reality, his ill-considered views can only harm the conservative cause.

As for blacks, it is necessary to recognize the large amount of dysfunction that besets them. For Carney, presumably, that dysfunction is an effect of poverty. But how, one wonders, would he explain the fact that though Asians are the poorest racial group in New York City, they still outperform all other groups academically? Again, how has it happened that several generations of Asians and of Jews have risen from poverty to distinction in this country? Why is it that poverty supposedly causes crime and dysfunction only in regard to Hispanics and blacks? The strange answer seems to be that these groups are not doing as well as other groups on certain measures.

It is simply not serious to maintain, as Carney does, that since “thousands of young men are shot on the streets of Chicago,” since “tens of thousands of black babies are aborted every year,” and since “hundreds of thousands [of black babies] are born out of wedlock,” blacks are playing a “rigged game.” Nobody is making blacks behave in these ways; they have free will, like the rest of us. Instead of telling blacks they’re victims, conservatives need to address the problems of black culture.

Those problems spring in the main from black misbehavior. That misbehavior has turned parts of Detroit, of Baltimore and Chicago, even of Minneapolis into very dangerous places. “This summer,” Heather Mac Donald writes in City Journal,

three shockingly violent mob attacks on white victims in downtown Minneapolis were captured by surveillance video. On August 3, in broad daylight, a dozen black assailants, some as young as 15, tried to take a man’s cellphone, viciously beating and kicking him as he lay on the ground. They jumped on his torso like a trampoline, stripped his shoes and pants off as they riffled through his pockets, smashed a planter pot on his head, and rode a bike over his prostrate body. On August 17, another large group kicked and punched their victim until he was unconscious, stealing his phone, wallet, keys, and cash. In July, two men were set upon in similar fashion. Such attacks have risen more than 50 percent in downtown Minneapolis this year.

Unlike Carney, Mac Donald is a serious writer, and ever empirical. In the same article, she writes:

Just this month, the Bureau of Justice Statistics released its 2018 survey of criminal victimization. According to the study, there were 593,598 interracial violent victimizations (excluding homicide) between blacks and whites last year, including white-on-black and black-on-white attacks. Blacks committed 537,204 of those interracial felonies, or 90 percent, and whites committed 56,394 of them, or less than 10 percent. That ratio is becoming more skewed, despite the Democratic claim of Trump-inspired white violence. In 2012–13, blacks committed 85 percent of all interracial victimizations between blacks and whites; whites committed 15 percent. From 2015 to 2018, the total number of white victims and the incidence of white victimization have grown as well.

Blacks are also overrepresented among perpetrators of hate crimes—by 50 percent—according to the most recent Justice Department data from 2017; whites are underrepresented by 24 percent. This is particularly true for anti-gay and anti-Semitic hate crimes.

Here, then, are what conservatives should be addressing: the nationwide problems of black crime and cultural dysfunction. If Carney had guts, he’d talk about black crime against whites. Instead, he imitates the leftist crowd.

Seventy percent of black children are born out of wedlock, and since the vast majority of blacks lack a father who embodies traditional values (education, responsibility, self-restraint, delayed gratification, obeying the law, thrift, sobriety), blacks will continue to be in a bad way unless they change their behavior. Nor, it goes without saying, can anybody do that for them. The welfare state may keep you alive, but it cannot provide you with an authority figure who can teach you to live well.

Conservative intellectuals tend to be a genteel and cowardly bunch. If they don’t blame black misbehavior on external forces in the manner of the left, then they ignore it altogether. There are some politically incorrect exceptions, but they are just that. Carney’s twaddle may keep the left from calling him a “racist,” yet for the right, and for America, it is worse than useless.