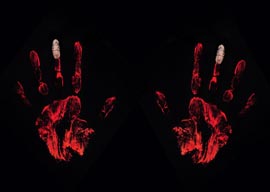 What was your first thought on seeing that video clip of the white cop shooting the fleeing black perp?

The point of reference here is the Trayvon Martin case of three years ago, when NBC doctored George Zimmerman’s conversations with his dispatcher to make Zimmerman sound prejudiced. (The network fired two employees over the doctoring and made a public apology; but Zimmerman lost a civil suit for damages.)

That the gentry liberals who run news services will lie and distort in defense of the social story they want to impose on us”the Narrative of snarling gap-toothed badwhites preying on helpless angelic blacks”was not news in 2012. Massaged video clips in support of the Narrative go back at least twenty years. The Zimmerman case did, though, push many of us over some line of credulity. I am no longer willing to take at face value any news story that supports the Narrative.

(The media types will lie and distort to gratify their own egos, too: but that’s a different issue.)

So when video of Officer Slager shooting Walter Scott showed up on news sites, my first thought was the one I have stated above. It was followed by second, third and fourth thoughts like:

“How long will it take to get to Narrative Collapse this time?”

“Why should a police officer not be able to shoot a fleeing perp?”

For those not familiar with the concept of Narrative Collapse, here is my description from a column where I defined it:

The last of my thought-questions recorded above actually has a straightforward answer: A cop should not shoot a fleeing perp because it’s against the law to do so, and cops should not break the law.

We can argue about whether shooting fleeing suspects should be against the law. I don”t think it should; and crime reporter Nicholas Stix over at VDARE.com tells us it didn”t used to be until a wrong-headed 1985 Supreme Court ruling. All right: but I”d like cops to obey laws, even dumb laws.

So am I going to concede that the Narrative-pushers might for once have it right:  that, as George Orwell observed, some things are true even though the Party says they are true?

Hell, no. I”ll suspend judgment until the full details of the Slager-Scott encounter come out in court. My bet is still on Narrative Collapse.

And I will not suspend judgment on Slager’s former lawyer David Aylor, who dropped the case when he saw the media piling on his client. Aylor is a spineless, gutless coward. Yo, Counselor:  the phrase “innocent until proven guilty in a court of law” mean anything?

Similarly for the North Charleston Police Union, which has refused support to Officer Slager, a dues-paying union member. Similarly again also for the crowd-funding website GoFundMe, which refused to host an appeal for Slager. Hey, GoFundMe: Go … never mind.

Where law enforcement is concerned, my gut instincts are all lower-lower-middle-class I”ve-always-kept-myself-respectable punitive. My party trick on the topic, with a few drinks inside me, is to argue the case for a One Strike And You”re Dead jurisprudence”capital punishment for subway turnstile jumpers. Hey, it would free up a lot of prison space.

That’s all first-reaction instinctual, though. When I sit down to think about it, and recall actual cases I”ve known or read about, I go all wobbly on law enforcement.

Consider, for example, the child abuse witch-hunts of 20-30 years ago, chronicled by Dorothy Rabinowitz in her book No Crueler Tyrannies. Over-zealous prosecutors, stupid juries, and whipped-up media hysteria conspired to send harmless people to prison for years, wrecking their lives and the lives of their loved ones.