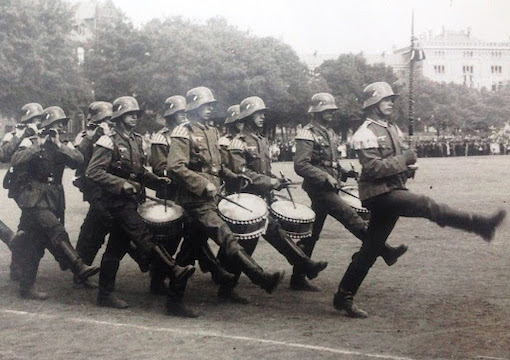 Look at it this way, we’re all doing Desert Island Discs nowadays, and unless you got the bug, it’s a damn good thing, too. I did the Desert Island bit around thirty years ago, with Sue Lawley the presenter, and we got along fine, even after I commented on the air that she had nice legs. I suspect today would have been a different story, but another good thing that the virus has brought is that the #MeToo crap is off the front pages. I hope for good, but probably no such luck.

Among my Desert Island picks was a version of “Lili Marlene” sung by a Wehrmacht choir that I first heard as a 4-year-old child in an Athens street while watching a marching group of German soldiers. I was with my adored Prussian nanny and looked in awe and admiration as they marched in impeccable step past us, singing the haunting song about a girl left behind. They were fair and tall in their great uniforms and helmets, and exuded martial discipline and strength. Childhood impressions stay with one, and fifty years later Sue and I talked about it without the usual BS about Germans.

And speaking of BS, this alpine village has apparently been hit quite hard by the you-know-what, but no one’s talking. Good old Helvetia, despite its size, is among the leading countries infected. All I know is that a good friend of ours whose chalet lies north of mine died from it last week, having been infected by his daughter whom I had kissed on the cheek two weeks before. (Poor thing must be feeling awful, but her dad was not in good health.)

“A pandemic can have strange outcomes. Mostly negative, of course, but with illuminations.”

Which brings to mind that drunken, foulmouthed Conor McGregor, who has just given 1 million euros to Ireland to combat the bug, which is equivalent to that Errol Flynn look-alike Jeff Bezos giving $2 billion to Uncle Sam. Bravo, Conor! Mixed martial artists don’t make the kind of moola that untalented rap gangsters do, yet he’s given the max. A pandemic can have strange outcomes. Mostly negative, of course, but with illuminations. For example: Having been schooled in America, I was taught that American democracy was truly the best, whereas I now know that Athenian democracy, however selective, was and is far superior. Virtue trumped freedom, according to Plato, especially as the democratic mob had put his mentor Socrates to death. Today, in the name of freedom, dour, self-appointed social justice warriors who cannot conjugate a verb correctly have shut down free speech in Western universities. In the name of freedom, Democrats in the U.S. Congress tried to hold up the stimulus bill in order to extort funds for “national minorities and gender pay equities.” (Plato must have turned over for sure after that one.) In the name of freedom of expression, CNN complained that the presidential task force against the virus lacked diversity. And the ghastly Nancy Pelosi demanded special LGBTQ provisions in Trump’s $2 trillion package.

What in hell is going on here? That old fool Joe Biden, who makes Corbyn sound young, called Trump a racist three weeks ago for banning flights from China. Oh yes, it almost slipped my mind while comparing freedom versus virtue—the NBC network in America invited the billionaire hedge funder Bill Ackman to tearfully predict that “Hell is coming,” while having shorted the market the day before and cashing in a cool 2.6 billion greenbacks. (Under normal conditions that would merit jail, but people’s minds are elsewhere.)

Plato was not as antidemocratic as he is often portrayed, because as he himself said, the principle of democracy is freedom, but the perversion of freedoms as I’ve stated above was why he favored virtue. In fact it’s a depravity of freedom that has large parts of the world’s media praise the communist regime for coming clean in mid-February, rather than late December. And it is a bigger depravity to condemn those who point the finger at the Chinese as racists. And then one has virtue, like the hundreds of thousands of volunteers against the virus, the thousands upon thousands of front-line defenders who risk their lives daily, and of course the Germans giving the rest of Europe ventilators and a chance to survive. See why virtue tops freedom any day of the week?

Have I overdone the philosophical ruminations? Okay, let’s get down to brass tacks: In this unprecedented crisis, countries have shown their mettle in their response to the virus. The voice we haven’t heard is that of the E.U., and that’s because the bureaucrooks are running scared. This is a real crisis that will bankrupt nations. Where will all the funding come from for the E.U. bigwigs to dispense once the plague has been vanquished? What country will stick to the budget deficits ordered by the clowns in Brussels? The only good thing about that bunch of tin-pot dictators is the improvement of looks now that Ursula von der Leyen has replaced that drunken buffoon from Luxembourg. Ursula is getting on, but she’s still a looker. She’s a mother of seven, I believe, which would have pleased a German leader who ended up rather badly 75 years ago. Thank your lucky stars, all you Brits, you’re well out of it, and you can even pass your own laws to fit the crisis. I think Ursula should go back home and have another child for the fatherland.