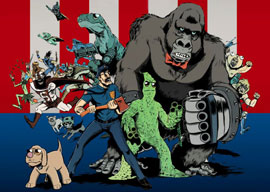 Also, the partisan alignment of the mid-20th century contributed to the lack of media animus against white Southerners. The New Deal Democrats’ unwieldy coalition of white Southerners and Northeasterners kept things congenially confused. The traditional Southern sob story about Yankee carpetbaggers ruining Reconstruction was accepted in New York and Boston because, whatever else you might want to say about white Southerners, they were loyal Democrats.

For example, one of the heroes of Profiles in Courage, the 1957 Pulitzer Prize-winning bestseller published under John F. Kennedy’s name, was a Republican senator whose 1868 vote had saved President Andrew Johnson from removal from office. Johnson, a drunken Southern bigot, had been impeached for firing the pro-civil rights Republican secretary of war Edwin Stanton. But to JFK’s ghostwriter, Johnson was a Democratic drunken Southern bigot. And that’s what really counted in 1957.

(If you want to see this forgotten 1950s Democratic mindset at work, watch the 2011 movie by the aged Robert Redford, The Conspirator, in which Stanton is the villain and a Confederate sympathizer is the heroine.)

Because the descendants of the Confederates have since mostly migrated to the GOP, region, race, religion, and party are now conveniently aligned. It’s so much easier to know whom to hate. Reading Chait would leave Axe Cop quite sure whose heads to chop off.

Even more useful than pushing your team’s side of the story is keeping anybody from mentioning details you’d rather not remember.

For example, in this era of Chaitian ancestral onus, how often is the Jewish role in the slave states recalled?

The first Jewish governor was David Emanuel in 1801 in Georgia. The first Jewish senator was David Levy Yulee in 1845 in Florida. The second was Judah P. Benjamin in 1853 in Louisiana. Benjamin later filled three top cabinet posts in the Confederacy (Secretary of War, Secretary of State, and Attorney General). Lehman Brothers, the Wall Street firm whose bankruptcy in September 2008 set off the Great Financial Crisis, started in the 1850s as a cotton broker in Montgomery, Alabama.

For some reason, this pattern doesn’t come up much.

Yet Jewish participation in American slave economies was not out of character. There was much money to be made off of slavery in the New World, and ethnic Jewish businessmen (whether religious, covert, or irreligious but endogamous) had played an important commercial role for centuries, especially in establishing Brazil‘s slave-powered sugar industry. Paul Johnson wrote in A History of the Jews:

Jews and marranos were particularly active in settling Brazil; the first governor-general, Thomas de Souza, sent out in 1549, was certainly of Jewish origin. They owned most of the sugar plantations.

Far more than cotton, much less tobacco, sugar was the great killer of slaves. (Recall Jim’s fear in Huckleberry Finn of being sold down the river to Louisiana.) With the sugar industry’s constant demand for new slaves to replace those worked to death, it was the main driver of the transatlantic slave trade.

Even post-Civil War immigrant Jews from Eastern Europe were not free of any role in the economic suffering of American blacks. In a famous 1895 speech, Booker T. Washington pleaded with white industrialists to “Cast down your bucket where you are””in other words, to hire black American citizens. But they were elbowed aside by the vast influx of Ellis Island immigrants.

In Britain the chief impresario of imperialism was Prime Minister Benjamin Disraeli, a master showman who excited the British over painting the map red.

The ensuing Scramble for Africa proved relatively profitless. A major exception was South Africa with its immense deposits of diamonds and gold. By the 1890s, half of the biggest mining companies in Johannesburg were Jewish-owned. According to Johnson:

But Jews had always been involved in precious stones (especially diamonds) and bullion, and they played a notable part both in the South African deep-level mines and in the financial system which raised the capital to sink them. Such men as Alfred Beit, Barney Barnato, Louis Cohen, Lionel Phillips, Julius Wehrner, Solly Joel, Adolf Goertz, George Albu and Abe Bailey turned South Africa into the world’s largest and richest mining economy.

In 1917 South African Ernest Oppenheimer founded the Anglo-American company and soon took over the fabulous De Beers diamond monopoly. The mining interests did oppose apartheid, seeing it as a Boer union conspiracy to raise miners’ wages.

Going back at least to the time of the poor Neanderthals, we all tend to be descended more from history’s winners than losers, so none of us should assume the purity of our ancestors’ and relatives’ morals. At minimum, fear of reciprocation should restrain our urge to denounce our contemporary rivals for corruption of blood.