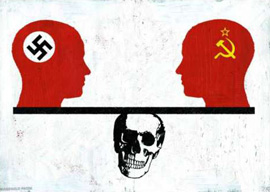 Much to the consternation of Western intellectuals and journalists, Hungary’s government sponsors a House of Terror in Budapest which dares to devote attention to not only Nazi crimes, but also Stalinist ones.

Ever since the ascendance of the “antifascist” (read: neo-Stalinist plus PC) persuasion in our “liberal democracies,” it has become gauche and somehow even anti-Semitic to compare Nazi (or more generally “fascist”) atrocities to the collateral damage of the communist forced march into the globalist future.

But the House of Terror’s director, GÃ¡bor Tallai, says it is sometimes hard to distinguish between victims of Nazi and Soviet terror. “Many Hungarian Jews who escaped Auschwitz were then dragged off by the Red Army to perform compulsory labor in Siberia.” Since my cousin was one of these forced laborers, I concede Tallai’s point.

“WWII’s aftermath served as a pretext for nationalists and pro-Soviet forces throughout Eastern Europe to carry out ethnic cleansing on a grand scale.”

More importantly, Tallai observes that it’s wrong to divide those who were destroyed by Nazi and Soviet tyrannies into “first and second class victims.” Victims of murderous regimes are victims whether or not fashionable intellectuals condemn some mass murders but excuse others. In German newspapers, political speeches, and learned circles, any attempt to bring up Soviet crimes against Germans, or even to mention that Stalin killed people who were not “fascists,” is condemned as Holocaust-Verharmlosung“trivialization of Nazi genocide. The 12-14 million Germans who were expelled from Eastern Europe after World War II deserved what they got because they were allegedly Nazi collaborators. This is imagined to be true even for anti-Nazi Germans in the Sudetenland and regions of Eastern Germany.

“Conservative” German Chancellor Angela Merkel ran to Moscow last May to thank the Russian government for Stalin’s kindness in liberating the Germans from fascism. Such an act is not surprising from someone who had been a loyal communist almost up until the time the Berlin Wall fell and whose father remained a diehard Stalinist until his death last year. It is all too typical of the current double standard toward tyranny in her country and elsewhere in the PC West. Former Stasi agents remain key players in German politics and may even creep into the federal government after the next national election.

Because of this nauseating double standard about Nazi and Soviet or Soviet-inspired crimes, I initially welcomed the release of Yale historian Tim Snyder’s Bloodlands, which was supposed to do justice to the crimes of both of those tyrannies that oppressed and decimated Central and Eastern Europe in the first half of the twentieth century. Snyder’s conclusions were published in the New York Review of Books, and after reading the article, it became apparent why an unmistakably leftist fortnightly went agog over his work.