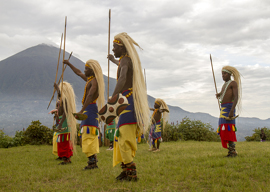 I’m still ticked off at him for not building the wall, but THANK YOU, PRESIDENT TRUMP, FOR POINTING OUT THAT MAXINE WATERS HAS A LOW I.Q.!

And there’s more great news! Contrary to every single New York Times editorial and opinion piece on the president’s “Muslim ban,” this week, the Supreme Court upheld the ban.

Or, as a Times op-ed put it back on Jan. 27, 2017: “(T)he order is illegal. More than 50 years ago, Congress outlawed such discrimination against immigrants based on national origin. …”—“Trump’s Immigration Ban Is Illegal,” by David J. Bier, immigration policy analyst at the Cato Institute.

Last week, in a column that does not misstate the facts and the law about immigration, I covered some typical asylum and refugee admissions to our country, including Beatrice Munyenyezi. She was the Rwandan who got into our country by claiming to be a victim of the genocide that killed nearly a million people, even though she had helped orchestrate it.

“We’re not rescuing anybody; we’re bringing in diseased cultures.”

Munyenyezi wasn’t the only participant in the Rwandan genocide who’s gotten in as a victim and then been unmasked as a perpetrator. So far, nearly 400 Rwandans granted special refugee status have been convicted of lying on visa applications about their role in the genocide. Great job, U.S. refugee admission officials!

Courts are dealing with so many genocidal Rwandans who came to America as “refugees” that just last Friday, a federal appeals court upheld the conviction of another one, Gervais “Ken” Ngombwa, who not only lied about his participation in the genocide, but also about his family relationships. (You can’t get anything past our State Department!)

Aside from our immigration authorities missing little things like the Rwandan genocide, what is the argument for taking in millions of people from backward cultures, hotbeds of real racism, pederasty and misogyny—as opposed to the “microaggressions” that are the bane of our culture?

It’s one thing to use quotas as a response to slavery and Jim Crow in our own country, but why do we have to have an immigration quota for “people who don’t live here, have never seen an indoor toilet and rape little girls for sport”?

Liberals act as if they are striking a blow for feminism by importing desperate women from misogynistic cultures to America. But, even to the extent they’re telling the truth, the women aren’t always victims only. They’re often co-conspirators.

Remember the Baby Hope case? In 1991, a little girl’s unidentified body was found in an Igloo cooler alongside the Henry Hudson Parkway. Twenty-two years later, the New York City police finally solved the case: The perpetrator turned out to be Baby Hope’s illegal alien cousin from Mexico, who had raped and killed her when she was 4 years old.

And how had he escaped justice for 22 years? The girl’s mother and aunt, also illegals, helped orchestrate the cover-up. The aunt helped dispose of the body and the girl’s mother never said a peep, despite admitting that she suspected all along that the corpse in the cooler was her unreported missing daughter.

Hmong girls in Minnesota are regularly gang raped by Hmong men, but the Hmong community—even the girls’ mothers—blame the rape victims, and the attacks go unreported. These aren’t cultures of strong women and criminal men. It’s more like criminal men and complicit women.

(One of the major articles reporting on the Hmong rape culture helping diversify America was Pam Louwagie and Dan Browning’s “Shamed Into Silence,” published in the Minneapolis Star Tribune in 2005. It used to be here. The detailed story won first place for In Depth Reporting from the Minnesota Society of Professional Journalists, but it seems to have disappeared from the Tribune’s website. Welcome to the Soviet Union!)