Cover Girls and Other Girls 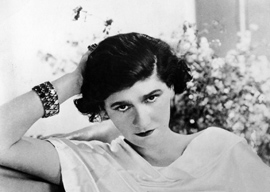 “An effete charlatan,” is the way the mother of my children describes the outrageously affected Hamish Bowles, a Vogue person whose pomposity is as fake as his upper-class English accent. The mother of my children, as I refer to my wife in order to annoy politically correct editors, and I are not in the habit of discussing ludicrous Vogue pederasts like the above-mentioned Bowles, but this being the silly season, we were reminiscing about how wonderful the fashion world was once upon a time, before coat hangers with faces became known as supermodels, and trans people took over the pages of glossy magazines.

The mother of my children began working for Paris Vogue when as an 18-year-old she refused to go to university and was offered a job by Francine Crescent, the then editor of Paris Vogue who had just replaced Françoise de la Renta. (I shall not mention the year because it would be ungallant.) Alexandra, being a Serene Highness, soon ended up on the cover of Paris Vogue, and Alexander Liberman, back then the executive director of all Condé Nast publications, asked her to work for American Vogue, but she refused. She had a full-time job going out with yours truly, and my thoughts about Vogue types were the same as they are today: They were and are untalented lonely onanists with the petulance of a terminally adolescent moron.

“Freaks are now seen as normal, and fashion seeks the sewer rather than the suave.”

Be that as it may, fashion models back then were beautiful and desirable women, and no women were more sought-after than the models who worked for Mademoiselle Chanel, as everyone who knew what was good for them called the living legend. Chanel was a terror but with perfect manners, unlike the totally made-up personality of a totally phony Anna Wintour, designed to intimidate underlings and prospective challengers. (She learned those tricks from a London hack by the name of Charles Wintour, her old man.) Chanel used only six models, and each was more beautiful than the last. They looked like normal women, had curves, and were ladies to begin with. They always were dressed in Chanel and they were out on the town accompanied by the City of Light’s swells rather regularly. Yours truly was madly in love with a couple of them. Mademoiselle herself warned me not to take life and love so seriously. (I was faking it.)

As one can imagine, life was pretty wonderful some fifty years ago. Jean Shrimpton, Suzy Parker, Marie-Hélène Arnaud, Dorian Leigh, even society girls like Melissa Weston and C.Z. Guest filled the fashion pages of New York and Paris. The rot began when ugly girls were found interesting to photograph by shutterbugs who realized ugly photographed easier than beautiful. Well, you know the rest. Freaks are now seen as normal, and fashion seeks the sewer rather than the suave.

Never mind. In next month’s glossies there are only black cover girls. Condé Nast lost 110 million big ones last year, and the Newhouse shylocks are furious. “Do we not bleed when we lose money?” they ask no one in particular. By turning their magazines more to the left than they already were, the shylocks are hoping to attract more advertising, but their move lacks subtlety. African-Americans constitute 13 percent of the population, and it is doubtful how many of that 13 percent care to read Vogue or feel much sympathy for the transgenders promoted by The New Yorker, another big money loser straining to convince America that it’s a country rife with systemic racism.

So, all you nice Takimag readers, spare a thought for the multibillionaire Newhouse family and have a good summer.