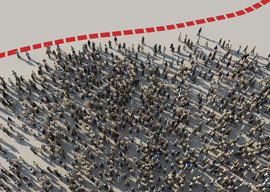 Once the French had cleared out of Moscow in October 1812, special commissions were set up to investigate those who had played nice with the invaders. Only 22 people, all of them of foreign extraction, had failed to remain true to their oath of loyalty to the Tsar. They were duly sent to Siberia. To the Tsar’s and the nobility’s great relief, the serfs had not taken the opportunity the French offered them to rise up against their masters in any numbers. John Quincy Adams, writing in his diary, describes the nobility’s greatest fear being a possible uprising of the serfs, and not the French. The common fatherland, however, was the unbreakable bond. A serf was a serf, and very badly treated at that, but he was first and foremost a Russian.

Okay, let’s fast-forward to 2016. I don”t know any hacks who dare even to acknowledge the nature of the problem: millions upon millions of fifth columnists among us! And worse, just saying that these millions arriving from these foreign cultures endanger our way of life and Christian traditions can put one in the pokey. Just imagine Europe being like Russia back in 1812, invaded by foreign armies under the leadership of some wild-eyed towel-wearer. Does anyone in their right mind believe that the 5 million Muslims in France, the 4 million in Britain, and the by-now 5 million in Germany would react like the Russian serfs did back then?

Mind you, this is a very bad comparison. Europe beat the Muslim armies three times”Tours in 732, Lepanto in 1571, and Vienna in 1683″but this time there will not even be a battle. Even if Marine Le Pen and Geert Wilders come to power and stop all further immigration, it is far too late. And not only have criminals like Angela Merkel and Jean-Claude Juncker and the rest of the gangsters who rule us ruined the old continent forever, they have also made it impossible for any country to reverse the rot and repatriate the fifth columnists. There are simply too many millions of prospective jihadists among us for any European state to take action against them.

“There are simply too many millions of prospective jihadists among us for any European state to take action against them.”

This is why Donald Trump is wiping the floor with his opponents. Immigration has been a very hot issue in America since I can remember. Obama gets elected and he opens the borders further and declares an amnesty. He does it in his second term, which is like giving the middle finger to those who vote and calling them suckers. So people turn to Trump. Some of the scummiest writings have come from The New York Times, a paper so desperate to reverse its fortunes that it now pretends that being a transsexual is normal, and shades toward the criminal classes at every opportunity. The Times hates cops, Christians, and white people. Hence it’s now firing people and losing money. A bit like Brussels, the old rag. The worse the policy is, the more they double down on it.

As I have said before, Europe is finished, but that doesn”t mean that great countries like Poland and Hungary will go down without a fight. Already these two nations, along with the Czechs and Slovaks, have not suffered from terrorism, and for one reason only: no halal diners, no Islamic cafÃ©s, no safe houses, no no-go areas inhabited only by Muslims, no networks of Saudi-financed mosques, schools, and cultural centers. Hence no terrorism in Warsaw or Bratislava or Budapest. (But you have the EU warning Poland’s government to play within the rules, a bit like a rat crying foul after getting caught in a mousetrap.)

Australia has handled its immigration problems well, but not nearly as well as Japan, the country that has absolutely not a scintilla of terrorism as it is verboten for Muslims to live there. America has more than 3 million Muslims, but it’s a big country and Americans do not take kindly if some bearded type calls his woman a whore for wearing a miniskirt. When 150 Somali Muslims recently demanded 20-minute breaks during their shifts in an assembly line in order to pray, the American company fired them and kept them fired. The N.Y. Times was appalled. I cheered, as did those who remember that we are a secular country and religion stays at home.

What is to be done? Nothing much, I”m afraid, except move to Poland or Hungary. When I told my friend Michael Mailer that there are Belgians and French who go to Syria, then return and claim they had a change of heart, and they”re taken at their word, he refused to believe it. “No one can be so dumb, not even the Belgians,” he said. Islamic activism has made sure that anyone who raises the warning flag is immediately shouted down as a racist. The sad part is that so many hacks and media types ape the Islamists and do exactly that. When I”m in Europe, I see these types on the BBC. They are among the greatest cowards ever, and believe you me, I”ve seen some cowards in my long life. Well, do go and reproduce yourselves, you cowardly media types, and I hope a million fleas invade your armpits.