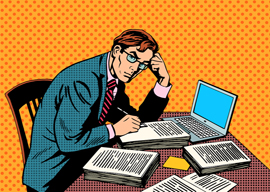 There is a strange class of beings, characterized chiefly by vanity and misery, known as writers. These persons, who are committed to saying the truth in a world of error and lies, depend on editors to get published. Editors are, of course, writers themselves, and because they function as gatekeepers, they are powerful and essential to intellectual culture. It is not enough for them to be knowledgeable about many subjects and to know what good writing is. The job, or vocation, comes with a certain moral responsibility. You must be principled, your will strong enough not to be swayed by mob pressure and passions. For you know that, men and women being the passionate creatures that they are, some are bound to get offended whenever important subjects are under consideration. Besides, between not offending people and providing a rich and vigorous publication, only a contemptible hack would choose the former.

Now we live in a democratic age and, what is unique in world history, an age of mass communication (more accurately, mass emotional confusion). So, whatever one writes may be subject to the moral smugness and conformist judgments of the majority. This is a pernicious situation for writers, who, insofar as they are original, are quite unlike the crowd that cannot understand them. People in general don’t care much about the truth—notice their utter incuriosity about existence itself—but they care quite a lot about their feelings and personal interests. Morality, outside a person’s intimate social circle, has always been largely a farce, a game people play lest they face that zeal to punish, which is the only reliable element in “moral behavior.” Still, most people crave the “moral” approval of others, because to stand on their own, supported only by their own judgment and backbone, is a horrifying thing. Indeed, most people have no judgment in an authentic sense—just stock views derived pell-mell in the course of their relations—and neither is their character worth much when it comes to so difficult a virtue as courage.

“People in general don’t care much about the truth, but they care quite a lot about their feelings and personal interests.”

Hence, then, the many inept editors of our time. The problem is not only that, like the ignorant professors who “educated” them, they have no business evaluating anyone’s writing. They are, as it were, Cowards Incorporated, cowardice being their distinguishing characteristic. Claire Berlinski, writing about the sexual-harassment farce, captures the character of these persons:

This article circulated from publication to publication, like old-fashioned samizdat and was rejected repeatedly with a sotto voce, “Don’t tell anyone. I agree with you. But no.” Friends have urged me not to publish it under my own name, vividly describing the mob that will tear me from limb to limb and leave the dingoes to pick over my flesh. It says something, doesn’t it, that I’ve been more hesitant to speak about this than I’ve been of getting on the wrong side of the mafia, al-Qaeda, or the Kremlin?

It does indeed. The article is so much good sense, arguing that while sexual harassment is wrong and therefore unacceptable, a mere accusation should not be allowed to ruin a man’s reputation. For years we’ve seen women try to profit from or simply exact revenge by falsely accusing men of sexual harassment and sexual assault. So far, we’ve learned nothing from this, for America has become a matriarchy, and therefore women are beyond criticism and even most right-wing publications don’t want to be associated with the implication that some of these accusers may not be truthful. “Don’t tell anyone. I agree with you.” That is the language of the most odious fear, and in it many of you editors may recognize your sorry selves.

Literary publishing is dominated by progressive women editors in New York City. As a result, male writers, however talented, are unlikely to succeed—unless they submit to the matriarchy. On this the agent Nat Sobel has commented in an interview:

[Men] have a much tougher road. We’ve read a number of pretty good novels by male writers that we know just won’t go. Male coming-of-age novels are impossible to sell.

There aren’t too many male fiction writers who are succeeding. And I don’t think that’s going to change for a while.

I think it’s troubling for all literary fiction writers today. But particularly for the male writers, who are only gradually becoming aware of how limiting…[the] audience is. But I think you can find good male writers who can write from the woman’s point of view, too…. If a male writer can write from the female point of view, or has a story that will interest a woman’s audience, I think he has a better chance than somebody who’s writing the kind of Hemingway-esque stuff we read in school.

Notice that although Sobel regrets this state of affairs, he shows no interest in changing it. Rather, men are to adapt.

Readers of this magazine are familiar with John Derbyshire’s controversial “The Talk: Nonblack Version.” Everyone who has spent much time in an American city knows that white people may have good reasons to distrust certain blacks. Like Berlinski’s, Derbyshire’s article is sheer common sense. But our time is allergic to that. Moreover, when it comes to race and gender, even most “conservatives” elect to go the PC way: Don’t be critical of blacks; “good people” just don’t do that. So, even though Goldberg, French, and the bland rest are not half as interesting as the original Derbyshire, he was promptly fired from National Review for his version of “the talk.” After all, the editors had donors to keep happy.