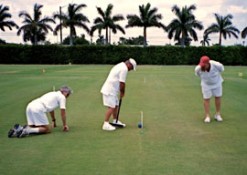 Judging by the hijinks and makeup on display at the recently-concluded World Cup, soccer, of all sports, certainly has the most crazed fans. Good for them. But I find it almost as boring as baseball. At the other extreme, the game of croquet is one that comprises few fans and only a handful of players. By comparison to soccer, croquet must be considered hermetic. In the popular imagination, it is a sport for the rich and the effete. To its initiates, however, croquet could not be more serious and down-to-earth.

American six-wicket croquet is a relatively new game, dating from the 1970s. It was invented by New York industrial designer Jack Osborn, assisted by money man S. Joseph Tankoos Jr., who owned the Delmonico Hotel in Manhattan and the Colony in Palm Beach, and by Herbert Swope, Jr, whose father’s expansive lawns in Great Neck and Sands Point, Long Island, had been the focal point of American croquet on the east coast in the twenties and thirties.

The Algonquin Round Table crowd—especially Alexander Wollcott, George Kaufman, Dorothy Parker, and Harpo Marx—played at Swope Sr.‘s place regularly on the weekends in summer, trading shots with millionaires Averell Harriman and Ogden Phipps. Swope Jr. remembered that the house guests would line up their cars, cut on the headlights, and play all night long. They used heavy Jaques mallets and wickets imported from London.

On the West Coast, Daryl Zanuck and Sam Goldwyn, in Palm Springs and Beverly Hills respectively, presided over a parallel croquet boomlet starting in the late thirties which extended well into the fifties. The Hollywood croquet contingent included Tyrone Power, Howard Hawks, George Sanders, Moss Hart, Louis Jourdan, and the bicoastal Harpo Marx. In those days, everything was up for grabs. For example, the courts were without assigned boundaries; opponents’ balls could be launched into the woods or down the road on purpose. Goldwyn’s two courts were laid out with sand traps. Rule books which did exist contradicted one another and were ignored. It was a free-for-all.

Jack Osborn was a newcomer to this world. His encounter with croquet began in 1959 in Westhampton, Long Island, on a Sunday afternoon at a friend’s house, down by the waterfront, when someone produced a “backyard croquet” set from the garage. As Osborn reminisced in the 1990s: “We must have enjoyed ourselves tremendously. We came back and did it again next weekend….” Soon he and his friends organized the Westhampton Mallet Club, decamped from the first venue because too many croquet balls were being lost in the drink, and invited Kennedy and Nixon to do battle on the Club’s lawn at a local inn during the 1960 election. This publicity stunt made it into the press.

Events carried forward in a tongue-in-cheek fashion until Osborn encountered the British, six-wicket game in 1967. The Brits sent over a contingent of players, including their champion, John Solomon. They ran circles around the New Yorkers, and showed them moves they had never dreamed of. The following year, Osborn and his gang visited the Hurlingham Club in London, the Vatican of international croquet. Osborn was spellbound. He said later, “…there is no question that the trip to England in 1968 was the turning point in my appreciation of the sport. When I saw them practice at Hurlingham, I recognized how great a change this [the English rules] would make to our game, and I was determined to master it as best I could.”

“These relatively minor adjustments revolutionized croquet in the colonies, and made the new game the best of both worlds. In fine, Osborn invented a new sport.”

The problem was, few of his compatriots in hidebound Westhampton felt the need to drop the American 9-wicket layout for the English 6-wicket layout. And no one wanted any part of the English rules. Osborn was stymied. His idea was to adjust the American game to the British six-wicket format, not to import the British game in toto. He resigned from Westhampton Mallet Club. He had cofounded the New York Croquet Club with Joe Tankoos in 1967. He began to implement his ideas in Central Park, and reached out to players in Palm Beach, Spring Lake, Southampton, and Bermuda. Thanks to the leadership of Jack Osborn, croquet evolved into the game played in America today under the aegis of the U.S. Croquet Association.

Osborn promoted and adopted the contact rule from the English game, which rule made running a break possible. He imported the six-wicket, English format in its entirety. The American 9-wicket game was relegated to the backyard for good. Osborn wisely retained the American rule of strict ball rotation (blue-red-black-yellow) and most importantly, the carry-over deadness rule after ending one’s turn. These relatively minor adjustments revolutionized croquet in the colonies, and made the new game the best of both worlds. In fine, Osborn invented a new sport.

Fast forward to the 21st Century. After a hiatus of over thirty years, two full-length articles appeared on the subject of competitive croquet in the New York Times in the summer of 2007, both written by Harry Hurt III as part of his regular Saturday column “Executive Pursuits”.

The first involved an invitational tournament in Southampton entitled “Wild Wickets of the East“. I was lucky enough to win first flight in that tournament. An action shot appeared in the paper, due to my colorful suspenders. I had just missed a wicket shot, and was doing some ridiculous footwork in reaction to it. Spectators were horrified. The second article was entitled “Ah, the Genteel, Civilized World of Croquet“ about the 2007 national championships, also in Southampton later that year. Not so genteel, according to Hurt, who appears to have a love/hate relationship with croquet, which is normal for those who play intermittently. Here is Harry’s description of the American game, which is the most concise I have come across:

The object of the game is to hit both your balls through a course of six wickets, first in a clockwise direction and then in a counterclockwise direction. You earn one point and one extra stroke by making a wicket. You earn two extra strokes by hitting your ball into another ball. But you are prohibited from hitting into that same ball again until you remove your “deadness” by making your next wicket. Once you”ve hit both your balls through all the wickets, you can win the game outright by knocking them against the center peg before your opponent does for a total of 26 points.

Two more crucial features distinguish competitive croquet from 9-wicket backyard croquet. In backyard games, the wickets are made of wire, and shaped in wide half-moons. In competitive croquet, the wickets are made of cast iron, and shaped in rectangles only an eighth of an inch wider than the diameter of the balls. In addition, there is a time limit of 90 minutes a game and a 45-second shot clock, which pressure a player’s shot making and decision making.

It is little wonder that newcomers become discouraged. Not long ago in Palm Beach, I saw a championship-ranked player botch a game-winning shot by missing the ball entirely. He took a swing with the mallet, but never made contact. He was trying too hard. On another occasion, I observed John Osborn—Jack’s son and one of the greatest players of the past ten years—go through the wrong wicket, one that he had already made several minutes before, and methodically get 3-ball dead to do it. He somehow recovered from this debacle to win the match. Usually, such a mistake would be fatal at that level. In croquet, top players are not immune from gigantic blunders.

Recently, one of the American greats passed away at the untimely age of 54. Jerry Stark—known affectionately as “The Barbarian” because of his ferocious appetite and long, reddish-blond beard—worked on the assembly line at General Motors in Kansas City, when he came into contact with “real croquet” in 1982. The encounter changed his life. He quit his job, and ran off to play the six-wicket game. He ended up as the pro at the Meadowood Resort in Napa Valley, won five national titles, and got inducted into the USCA Hall of Fame. In December 2009, Jerry Stark was the captain of the only American team to beat the Brits for the Solomon Trophy, an annual tournament between America and England inaugurated by John Solomon in 1988.

Then there is my friend in Greenwich, Connecticut. His dream in life is to win the Nationals. He may yet do it. He loves to attack his opponent over long distances unexpectedly. It is unnerving, because he often succeeds. We were playing at a magnificent private court in nearby Ridgefield one afternoon a few years ago. All of a sudden, he stops swinging the mallet, and looks around, as if awakening from a dream. He was an executive at IBM. He says, “Is this a great game, or what?” It was out of the blue. I nodded my assent, “Indeed, it is.” He went on to proclaim in a completely serious manner, “Let’s just hope the golfers stay clueless.” I reassured him that his hope would be fulfilled, and that those of us in the elite world of croquet were in no danger of being overwhelmed.