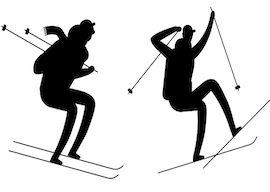 Who was it who said we always hurt those we love the most? I did just that last week, skiing out of control, making a sharp left turn, and crashing into my wife, Alexandra—a beautiful and terrific skier—who was standing still under a mogul. As I knocked her down, my skis ran over her face, crushing her nose and cutting two deep gashes on her forehead. I then rolled down the mountain unable to stop because of these ghastly plastic garments we now wear that accelerate one’s speed on the ground. Neither Alexandra nor I wear a helmet while skiing, something to reconsider if ever there is a next time.

We were four, including my son-in-law and daughter, who came to the wife’s aid as I had rolled down about a quarter of a mile and was having trouble getting back up. Alexandra bled a lot, but fortunately her nose was very bruised but not broken—even if I say so myself, she has a perfect nose—but now, after one week, she looks as if she had gone five rounds with Mike Tyson at his peak. The gashes are large, both eyes are a deep purple and black, and she feels concussed. My children have kept the jokes to a minimum, and so have I. Needless to say, I feel absolutely horrified; with so many unpleasant people who now ski, I had to crash into the one I love the most.

Forty-seven years is a long time to be Madame Taki, and although born a Serene Highness, she’s always called herself Mrs. T, something I take as a compliment to my uxorious nature. Although I have been a very bad boy most of my life, the one time she should not have turned a blind eye was last week, but there you have it. Life’s about what we can and cannot control, and last week I was out of control due to age, bravado, and the refusal to acknowledge that things ain’t what they used to be. I have to slow down and grow up. Mind you, after we all skied down and stopped the bleeding, I thought of all the people I could have crashed into—why oh why doesn’t Philip Green ski?—then it was time to helicopter to Bern for X-rays. Now everything’s hunky-dory except she don’t look so good no more. But it’s only a matter of time. So I am now an extra man as Alexandra has canceled her social agenda until further notice.

“With so many unpleasant people who now ski, I had to crash into the one I love the most.”

Ironically, I happened to be rereading The Kreutzer Sonata, Leo Tolstoy’s novella, the very day of the accident. Written in 1889, it takes place on a train—Leo baby must have liked trains because they often play a large part in his fiction, especially when Anna Karenina throws herself under one—where a quiet but “sardonically observant” passenger called Pozdnyshev recalls his life as a fornicator and his marriage to a woman based on mutual deceptions. He catches her cheating on him and murders her. He is given a light sentence because his crime is judged to be a “crime passionnel.” He now rides the trains seeking absolution. Sex is bad, says Leo, but for once I beg to differ with Count Tolstoy.

Well, no, I did not catch Alexandra ever cheating on me, and would not have killed her if I had, but our marriage has lasted as long as it has because she’s first a lady and a mother, and a wife who understands that if one marries a bad boy, they stay bad all their life. Anyway, as I’ve always said, one can be a faithless hubby and a very good one, or a faithful one and lousy as hell.

This was the bad news. The good is that a Spectator reader, Peter Levelle, has invented a system—Booteze—that helps one glide into the ski boot. It’s like putting on a slipper. He is now perfecting it, but look out for it, you will never have trouble getting into a ski boot again. I want to thank him and wish him all the best for his kindness and generosity. I wonder what other publication has such readers. Maybe Screw magazine can send some videos about manners to Philip Green.

Last but not least, Steve Kerridge, a Brit, has put together a glossy coffee-table book about Bruce Lee, the most comprehensive study of his life and art that I know of. The book is beautifully bound and is called Mandarin Superstar, something Bruce Lee certainly was. It includes a rather nice picture of a much younger Taki, who trained with Bruce in Gstaad back in 1970 when the superstar was a guest of Roman Polanski. Steve Kerridge has done a great job and was very faithful and accurate in reporting the things I said to him. This is very rare, and the result is a wonderful book pictorially and otherwise of a life cut short of a great martial artist. I thank both gentlemen, as I did some ten years ago when I falsely announced my engagement to Mary Wakefield and a Speccie-reading couple sent me some very good wine and then refused to take it back once I admitted I had seen Mary only once and from a distance. See the difference between writing for The Spectator and, say, Screw magazine? We have readers such as the above, S mag has Philip Green types.