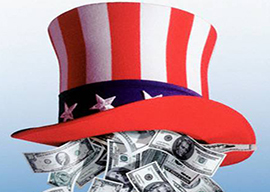 The $787-billion American Recovery and Reinvestment Act of 2009 (ARRA), signed into law by President Obama on February 17, 2009, has been largely forgotten, despite the fact that it consumes hundreds of millions of taxpayers” dollars daily. Earlier this month the Recovery Progress Report summarized: “As of December 1, $466.8 billion of the $787 billion stimulus has been committed to states; $333.8 billion has been paid out.” [Note: That adds up to over $800 billion, but the government was never that great at math.]

With deficits surging and inflation rising, we should recall that by 2011, the ARRA was expected to have created over 3.5 million jobs. But unemployment is up to 9.8 percent, a 21 percent increase from when the “stimulus” bill was signed. Unemployed workers have become a class of their own”distressed, demoralized, and destitute.

Senator Tom Coburn’s (R-OK) report, “100 Stimulus Projects: A Second Opinion”, outlined some of the most obscure stimulus projects Congress included in the legislation:

-$3.4 million for Wildlife “Eco-Passage” in Florida
-$800,000 to repave a rarely-used back-up runway in Johnstown, Pennsylvania
-$10 million to renovate a century old train station that hasn’t been used in 30 years
-$1 million to construct a new guardrail over an Oklahoma lake

Despite the hundreds of billions already paid out for “stimulation,” the economy and unemployment rate remain stagnant. Why? Because the government does not allocate funds efficiently. Spending is based on political favoritism instead of common sense and good business.

“In the end, the ARRA is not an economic stimulus. It is a political stimulus, designed to line bureaucrats” pockets with votes and political contributions.”

It was reported recently that The National Science Foundation contributed $141,002 in stimulus money to Montana University for a six-week excursion to Hangzhou, China, to study dinosaur eggs. How many jobs did this “collegiate” field trip create? Zero”a giant goose egg.