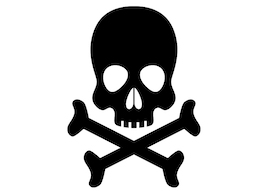 Every year Halloween seems to get more popular. Between the free candy and the dress-up parties, the month of October also provides an excuse to ruminate on the themes of horror, the occult, and the strange. Given the left’s depiction of Republicans and conservatives as a blandly wholesome people, it’s fun to think of the right’s spiritual underbelly. Some of our most popular right-leaning politicians and intellectuals have held beliefs that are mystical, weird, and “New Agey.” I would even allow the word…spooky.

Let’s start with the president. Our tweeting White House alpha male was brought up in a unique church. Trump’s pastor was Norman Vincent Peale. Peale blended Christianity with the doctrine of New Thought or “the power of positive thinking.” This was decades before Oprah promoted “The Secret.” It was before Joel Osteen preached his own brand of sunshine-and-lollipops Christianity. The concept that unites this group is their teaching of the omnipotence of the human will. The idea that you can think, talk, and will your way to self-improvement has been the heart of American romanticism since at least the 19th century.

New Thought and positive thinking teaches that one should cultivate one’s own will and desires religiously. You see this in practice when people talk of “speaking things into existence,” deploy visualization techniques, or make vision boards. Some have argued these mystical ideas go back further to Idealist and Hermetic traditions, that they begin in the mystery religions of the ancient world. In many ways these ideas are the opposite of Christianity in the Bible, which teaches that one submit their will to God’s will.

“Given the left’s depiction of Republicans and conservatives as a blandly wholesome people, it’s fun to think of the right’s spiritual underbelly.”

Put another way, Trump was raised under Peale’s Christianized version of the “Do what thou wilt” ethos made famous by occultist Aleister Crowley (and championed later by Led Zeppelin guitarist Jimmy Page). This sounds ominous. However, Trump is not the first Republican to get inspiration from the occult.

The superhero of the Republican Party is still Ronald Reagan. Since he was a nondenominational Christian, it’s presumed he was a straightforward evangelical. However, this was not the case. For Reagan, the importance of religious belief was simply in the believing. His attitude toward religion resembled that of another Republican, Dwight Eisenhower:

“[The American] form of government has no sense unless it is founded in a deeply felt religious faith, and I don’t care what it is.”

Reagan’s wife, Nancy, famously took advice from astrologers. It was on astrological advice that Ronald Reagan was inaugurated as governor of California on Jan. 2 at exactly 12:10 a.m. Reagan’s superstitious mindset continued in his presidency with his reliance on astrologer Joan Quigley.

An astrologer had set the time for summit meetings, presidential debates, Reagan’s 1985 cancer surgery, State of the Union addresses and much more. Without an O.K. from the astrologer, he said, Air Force One did not take off.

What drove Reagan’s strange beliefs? Some point to his friendship with the Los Angeles occultist Manly P. Hall. In the 1930s, Hall became a spiritual guru and was a prodigious scholar of ancient religions. Reagan borrowed a number of stories and phrases from Hall’s writing for his own speeches. Decades later the future Democratic candidate Marianne Williamson would teach classes at Hall’s school, the Philosophical Research Society. There she would cover the New Age book A Course in Miracles. It goes to show, it is not just liberal Democrats who go into the mystic.

Then there is the case of Russell Kirk. Kirk was one of the most famous mid-20th-century conservative intellectuals. His 1953 book The Conservative Mind arguably launched the modern conservative movement. He was there for the founding of National Review. He was even well-liked by liberals. The film critic Roger Ebert once called him his “favorite conservative.” Kirk eventually became a Catholic (practically a legal obligation if one wants to write for National Review), but he had an occult background. As Kirk wrote in a letter: “Henry James was a man with Swedenborgian forebears who didn’t believe in ghosts; I am one with Swedenborgian forebears who does believe in ghosts.”

Kirk would hold séances and practiced the tarot until the 1970s. He used his spiritualist background for fuel in his literary career and was considered one of the premier writers of ghost stories, winning praise from the likes of Ray Bradbury, Stephen King (with whom he shared an agent), and Jerry Pournelle.

General Patton was the very image of American masculinity in World War II. He also believed in reincarnation. When a British general said to Patton, “George, you would have made a great marshal for Napoleon if you had lived in the 19th century.” Patton remarked, “But I did.”

Samuel Hayakawa was the Republican senator representing California from 1977 until 1983. He was a proponent of Alfred Korzybski’s discipline called General Semantics. In its founding text, Science and Sanity, General Semantics is presented as “both a theoretical and a practical system whose adoption can reliably alter human behavior in the direction of greater sanity.” Imagine grammar Nazis believing they could save the world and you get the idea. General Semantics would fall out of favor in the 1950s, with many of its followers abandoning it for L. Ron Hubbard’s similar but more exciting system called Dianetics. At least Scientology offered them the opportunity to become a movie star’s slave.

And one of the greatest conservative writers of any era, G.K. Chesterton, got caught up in the spiritualist craze of the 1870s. He described himself as a brief dabbler in spiritualism without having formally become a spiritualist. Chesterton said of his experience with the Ouija board:

I saw quite enough of the thing to be able to testify, with complete certainty, that something happens which is not in the ordinary sense natural, or produced by the normal and conscious human will…. The only thing I will say with complete confidence, about that mystic and invisible power, is that it tells lies…. [They] are not truths about the other world; or for that matter about this world.

Just how many other famous Republicans and conservatives had a penchant for the mystical and spooky? To find out we’d perhaps have to consult the owl at Bohemian Grove, or join the mysterious Skull and Bones.