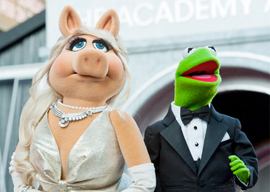 Miss Piggy and Kermit the Frog

Although most critics lambasted this year’s Oscar show, I roared with laughter. The jokes were funny. Some were even hilarious. It was a ginormous improvement on last year’s awards, even though the presentation felt dated at times.

You gotta love any event that Kermit and Miss Piggy deem important enough to grace with their presence. They should host next year if the Oscar people really want to appeal to a younger audience. Muppets are certainly more amusing than Anne Hathaway and James Franco will ever be.

If Kermit and Piggy didn”t steal the show, Zach Galifianakis and Will Ferrell did. That routine with the cymbals and their white marching-band costumes was brilliant. Billy “Botox” Crystal’s mind-reading number came in a close second. The comical Emma Stone was not only one of the few well-dressed women, she was flawless as the overeager first-time presenter.

“Although most critics lambasted this year’s Oscar show, I roared with laughter.”

Angelina Jolie‘s right leg had the onerous task of remaining in view at all times despite the veiled slit in her black velvet dress. This ridiculous attempt at sex appeal produced a handful of uncomfortably funny photo opportunities and onscreen moments. Someone who knows Jolie should tell her that scrawny legs are not sexy and she should pack on 20 pounds pronto. While you”re at it, tell Brad Pitt to cut his hair, shave his beard, and dress like a gentleman instead of a car mechanic. He’s too good-looking to be so unpolished.

The typical Hollywood montages were not as lame as usual. The mid-show entertainment by the Cirque du Soleil was spectacular, with wonderful costumes and mind-blowing feats of human strength and flexibility. Surprisingly, the acceptance speeches were often amusing and some were even funny. For once, not everybody thanked their mother and their spouse. Max von Sydow‘s speech was the most gracious.

The show was far more interesting than the actual awards, which were predictably lame in their scope. Biggest bummer was the fact that The Artist won so many awards. Only a dramatic industry that acts as if it was saving the universe would kowtow to Harvey Weinstein instead of paying even tossing one Oscar at Moneyball.

Since fashion is my passion, Gwyneth Paltrow, Emma Stone, Tina Fey, Glenn Close, and Penelope Cruz rocked the best looks. The ugliest of the ugly were donned by Jennifer Lopez, Missi Pyle, Melissa McCarthy, Giuliana Rancic, and Meryl Streep. As far as fashion goes, these awards were the worst. Pathetic!