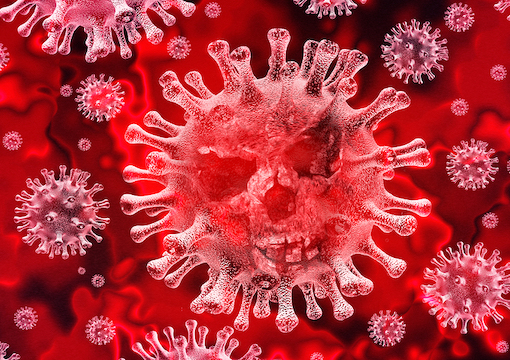 For weeks, the coronavirus news has been paralyzingly bad, leaving President Trump, the Democratic candidates, and the media with little to offer in the way of pragmatic or inspiring leadership on the issue. But over the past few days, data on new infections in Wuhan, China and in South Korea suggest that there might be light at the end of the tunnel.

It now is conceivable that an aggressive response in America could not merely “slow the spread” and “flatten the curve” of this exponentially growing outbreak, but crush it altogether. America’s aim should not be moderation of the epidemic, but its eradication.

Our goal should be not just to lose more slowly and gracefully, but to win.

The most sophisticated idea back in February was that the best we could hope for was to spread out the incidence of infection over enough months to avoid the apocalyptic scenario in which America’s medical system is overwhelmed and exhausted doctors must make triage decisions between treating COVID-19 victims and, say, heart attack victims.

“Our goal should be not just to lose more slowly and gracefully, but to win.”

University of Washington biologist Carl T. Bergstrom developed this useful hypothetical graph below (which he specifies is “freely available for any use under the CC-BY-2.0 license”) to get across the idea of how slowing the spread can lessen the chances that your loved one will be turned away by the hospital.

In Bergstrom’s graph, the horizontal axis is time and the vertical axis is the number of cases at any one point. Under uncontrolled transmission (the graph’s red curve) of the new coronavirus in the United States, it’s almost inevitable that our approximately 95,000 intensive care unit (ICU) beds would be filled, followed by the rest of the hospital beds in the country. Hospitals in northern Italy may be approaching this dire situation now. 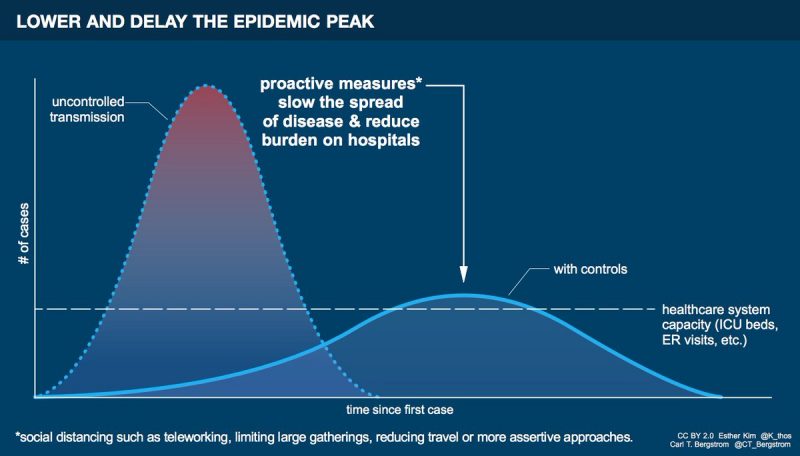 If we can flatten the curve enough to follow the blue curve, the total number of cases wouldn’t be all that much different than under the unconstrained red curve, with both curves relying upon herd immunity to eventually reduce new cases to zero; but the total number of deaths from the pandemic under the slower trajectory will be much less because there would always be almost enough hospital capacity for everyone.

But slowing the spread, while a valid idea, is still a depressing goal, especially because the economic costs of the kind of social shutdowns imposed in China, and now in Italy, are no doubt enormous. The hope of flattening the curve reminds me of the dreary sports cliché that goes back at least to O.J. Simpson in 1968, “You can’t stop O.J., you can only hope to contain him.”

So, fighting a long, drawn-out war of attrition with COVID-19 has yet to galvanize the public or its leadership. Lots of Americans seem at present to be thinking: “Eh, just let it run amok and let’s get it over with.” But they don’t yet realize how awful the peak would be when the health care system overloads.

Fortunately, a new idea has emerged from the data released last Friday on new coronavirus cases in Wuhan up through Feb. 18. Back in January, each person with the disease was passing it on to an average of 3.86 other people. An R0 (the “basic reproduction number,” which is pronounced “R-nought”) of 3.86 represents exponential growth nearly to the power of four, a catastrophic rate.

Mathematically, as long as R0 is greater than 1, the epidemic spreads. When R0 falls below 1, however, it starts to die out.

Via heroic shutdown measures (basically, confining most of the population of this huge city to their apartments), the Chinese cut the R0 in Wuhan by more than an order of magnitude down to 0.32. New infections fell by almost 95%.

Granted, there is the important question of how much to trust Chinese statistics. I can’t answer that, but it’s worth pointing out that China’s boss, Xi Jinping, had been keeping himself far away from Wuhan. Xi is an ambitious man who wants to be ruler of China for decades into the future, so he’d only sent disposable deputies. But on Tuesday, it was reported that he was paying his first visit to the plague spot, suggesting that the situation had indeed improved enough for Xi to risk his own health.

The recent data imply that in Wuhan they are now on a path to not just controlling the epidemic but conquering it, perhaps by spring. The Chinese authors of the preprint (i.e., not yet peer-reviewed) article “Evolving Epidemiology and Impact of Non-pharmaceutical Interventions on the Outbreak of Coronavirus Disease 2019 in Wuhan, China” statistically speculate that new cases of WuFlu could be gone from Wuhan by early May:

This is, of course, just an estimate. All sorts of bad news could intrude on this rosy forecast, such as that attempts to restart the economy in Wuhan could raise R0, potentially above 1 again. Or the outside world could reintroduce the Wuhan Virus back to Wuhan.

But Wuhan’s path offers us the lesson that the new goal should be not to try to merely limit the epidemic, to simply flatten the curve so it doesn’t overwhelm the medical system. Instead, our national goal should be to wipe out the virus, to crush it completely.

Physicist and evolutionary theorist Gregory Cochran changed his mind on this subject in a conversation with me on Monday. Cochran had long been advocating flattening the curve as the proper target, but he realized:

But this is the wrong idea. You have to get R0 down close to 1.0 (from around 3.0) in order to really slow the growth—ordinary influenza has an R0 of around 1.3 and it grows way too rapidly.

Don’t aim at getting close to 1.0: aim at getting below. Basically, the region of parameter space that would correspond to “flattening the curve” is tiny, and 90% of the way to a clear win.

In other words, the effort it takes to flatten the curve is almost as great as it takes to win outright.

No longer should the goal be a well-played defeat. As Cochran sums up by quoting Douglas MacArthur:

There is no substitute for victory.

This would require massive sacrifice, although perhaps not quite on the scale of the Chinese lockdown because we have more square feet in our homes, more private cars, and less reliance on public transportation. But, at least there’s now a worthy goal for what all the pain would be for: victory.

The new goal is not to lose more slowly to the virus, but to conquer it.

Which of the 2020 candidates will embrace winning?