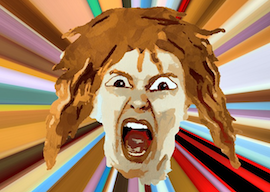 The morning after Donald Trump won the election, breakfast tasted better than it had in years. It was unseasonably warm for November, and I was seated at an outside table at a Brooklyn restaurant as a woman stomped by on the sidewalk in her business shoes, sobbing on the phone about the regime of rape camps and torture rooms and forced clitoridectomies she was certain the Trumpenreich would herald.

“HA HA HA!” I shouted at her. “CRY! CRY! CRY!” When I returned to eating my omelet, it tasted better than ever.

A year later, they’re still crying. And screaming. They haven’t stopped for a second. Through their myriad poo-flingin’ diaper tantrums such as election recounts, begging electors to switch their votes, impeachment threats, the Russia deflection, and now the Nazi Scare, they’ve proved congenitally incapable of realizing this sort of behavior is exactly why they lost in the first place.

And they keep organizing and networking and workshopping and fellowshipping so that they can gather together in public to cry even more, because if crying for 365 days didn’t work, surely the 366th day will finally do the trick.

On November 4, a group called “Refuse Fascism”—which is apparently under the deep delusion that Trump’s presidency is a fascist one, and if that was remotely true they wouldn’t get away for a minute with all the assassination threats and burning effigies and property destruction and smack-talking they’ve been getting away with for every minute since he was elected, but fanatics are immune to facts—is calling all its brain-dead shriek-monsters to “Take To The Streets And Public Squares…in cities and towns across the country continuing day after day and night after night—not stopping—until our DEMAND is met.

“The ‘nightmare,’ you mental cases, is all inside your heads.”

Their “DEMAND” is that the Trump Administration be “removed from power,” or they will keep on a-takin’ it to the streets in a very nonspecific way that, when pressed, they insist will be nonviolent unless, of course, they spot some “fascist” somewhere and their inerrant moral compasses urge them to smash that Nazi’s brains into the concrete.

Listen to the hyperbolic American Clown World Concentration Camp these blockheads believe they’ve been trapped inside since Trump was elected:

A Nightmare…Immigrants living in terror—their next step could mean detention, deportation, being torn from children and loved ones….Millions—children, the elderly, disabled, the sick, the poor—denied healthcare, food assistance, the very right to live….Women objectified, degraded, and denied the basic right to control their own reproduction, with fundamentalist Christian fascism increasingly being made law….Black and Latino people openly threatened by the President, with maximum sentencing, stop-and-frisk going national, intensified police brutality and murder of our youth with no holds barred….A regime unleashing the violence of white supremacists, anti-semites, [sic] and fascist thugs.

I gotta admit, that all sounds rather exciting. But it is with deep sorrow that I must inform these fuzzy-brained boobs that not a single member of their Fabulous Furry Freak Coalition is being “denied…the very right to live.” Neither are any immigrants “living in terror” except illegal ones who’d be much more justified in feeling terrified of deportation in any other country in the world besides the United States, which currently exists with almost no border protection. Let any one of these squirming worms go down to Mexico, start exploiting the public welfare system, brag of being undocumented, pour into the streets calling the host culture “racist,” and expect not to be shot dead within five minutes. And I’d challenge any one of them to present a single instance where Trump “openly threatened” blacks or the so-called “Latinos,” most of whom don’t even speak Latin. Trump has always said he loves “the blacks,” but in the hardness of their hearts, the blacks refuse to accept his love.

The “nightmare,” you mental cases, is all inside your heads. And if there is any violence on November 4, I am certain that the mainstream media will not blame it on you, despite the fact that your side has been the instigator in nearly all American political violence in memory, including Charlottesville. You operate from atop an extraordinarily flimsy scaffolding, knowing that all you need to do is claim that you’re “fighting back” against “Nazis” who secretly want to kill you even though they’ve never said any such thing and didn’t throw the first punch, and the media will run cover for you no matter how many skulls you crack.