Cry Me a Rivers 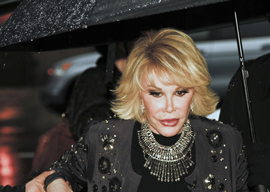 When I read about Joan Rivers” death, my eyes welled up with stinging tears. Not because she”d died (come on: she was 81) but in anticipation of the mouthwatering multi-million-dollar malpractice suit that was sure to follow.

Her endoscopy clinic denies it, but reportedly, a doctor performed a highly irregular biopsy on the veteran comedian’s timeworn vocal cords. “Can we talk?” indeed.

So, yes, “Joan Rivers died doing what she loved. Having surgery.” But how ironic that for once, Rivers had gone under the knife not to tweak her Winchester House of a face, but presumably to repair her all-important voice box.

(Although there is a cosmetic surgery procedure called a “voice lift” now, because of course there is. As the japes at Cracked.com explain, “The idea is that if your voice has become old and scratchy with the years, this will have you sounding like a young man again! You”ll look 20 years younger! On the phone!”)

“To rail against the unfairness of it all, to labor in vain to overturn “society’s standards of beauty,” is to take gravity to court, boycott DNA, or “raise awareness” among salmon regarding the numerous hazards of swimming upstream.”

How or why Joan Rivers (or anyone within earshot) figured her voice suddenly needed fixing, I couldn”t tell you. Since she wasn”t beautiful, Rivers” voice was usually described as “raspy” or “grating.” Had she looked like Kathleen Turner and sounded exactly the same, the word would”ve been “husky” instead.

To state that Joan Rivers” life would”ve been completely different if she”d been better looking is to say nothing””If we had ham, we could make a ham and cheese sandwich if we had cheese””and, yet, everything.

Beauty is the female’s primary reserve currency. Some women inherit a pulchritude trust fund; others, like Joan Rivers, are the ones we hear about in stump speeches, those born already owing some five-figure debt to someone or other.

To rail against the unfairness of it all, to labor in vain to overturn “society’s standards of beauty,” is to take gravity to court, boycott DNA, or “raise awareness” among salmon regarding the numerous hazards of swimming upstream. Of course, this hasn”t prevented any number of modern women from doing so.

Now, when I was a punk, I wasn”t “challenging” the “corporate patriarchy” while secretly hoping to attract boys regardless; I was trying to look even uglier than I already was and be left alone. I liked feeling free and fierce“for a time. But it’s an exhausting way to live, and, yes, unnatural.

For most women”the ones born “in debt””it takes far more effort to try to look beautiful, but it’s also a more natural pursuit, which ameliorates the “exhausting” part. So while the ship-of-Theseus results were literally plastic and ultimately grotesque, Joan Rivers” pursuit of beauty was, in fact, perfectly natural, normal, and sane”a sound female mind’s attempt to escape from an unsatisfactory body and unfair fate. In that, Rivers faintly resembles another tireless, pioneering Jewish entertainer”Houdini”right down to the dumb, ignoble death.

Rivers was more successful at paying down debt of a different kind. She awoke from the nightmare of her husband’s 1987 suicide to learn that he”d left her $37 million in the hole.

Astonishingly, instead of declaring bankruptcy, she paid off that debt little by little, the old-fashioned way, taking every job she could, then went on to leave a $150 million estate.