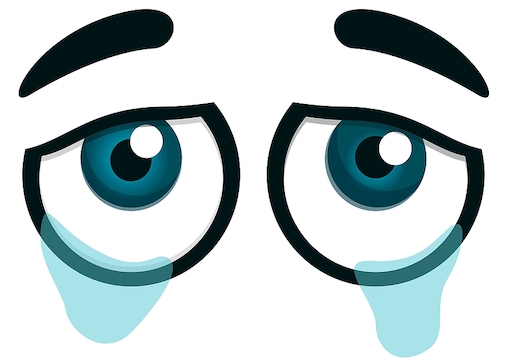 It is difficult to tell the difference these days between what is the serious and the spoof. For example, I came across this recently, an article in the student magazine of University College, London:

The benefits of a good cry are manifold: it detoxifies the body, helps self-sooth, dulls pain, helps restore emotional balance and acts as a pretty clear signifier to pals and strangers alike that you need a kind word or hug.

So having established the cathartic utility of a good cry—where are the best places to cry on campus?

For the sake of this article and future generations of UCL students, this list is not restricted to the places currently open during lockdown, because that would be woefully limited, but details the twenty best and worst places for a little cry on campus.

I cannot be absolutely sure, of course, but I think this is not satire; but even if it is satire, it is not without interest. Let us proceed on the assumption that it’s meant literally, or with only faint irony.

One must make allowances for the age of the writer, of course, for youth is the age of solemn superficiality, but all the same I find it alarming that someone who is probably in the 1 or 2 percent who will form the intellectual, and possibly the social, elite of the country can believe that crying detoxifies the human body. It is true that in the not-very- distant past, surgeons used to cut out various portions of the intestinal tracts of hypochondriacs in the belief that they were introducing unspecified “poisons” into the system, and that some doctors even removed the teeth of madmen because they believed that infection of their gums was the cause of their madness, but one might have hoped that talk of, and belief in, unidentified bodily “toxins” would have disappeared with the advance of science.

“This eulogy to crying and sobbing seems to me emblematic of a time in which people gain their sense of self by being noticed by others.”

Where people are prepared to cry in public, and doing so is hoped to bring some advantage, the meaning of the gesture must be devalued. Indeed, its sincerity will come into question, as does the sincerity of expressions of repentance when there is an obvious reward (a lesser prison sentence, for example) for expressing it. Likewise with swearing, which means something if a person does not habitually swear. If people incontinently take to crying, then they will come to be either ignored or suspected of trying it on, or the solace others will offer them will be as bogus as the tears that call it forth. There are laws of diminishing returns and marginal utility in displays of emotion.

The young writer goes on to enumerate further advantages of public weeping:

There is something pretty freeing in a proper sob in public, a kind of revelry in the shamelessness of just not caring…

Liberation from what, one might ask? The only answer seems to be restraint, the need to keep one’s composure and dignity in public. Instead, what is preferred is shamelessness, an asocial quality at best, an antisocial one at worst. For shamelessness is an indifference to the opinion or even the comfort of others, as well as a loss of sense of seemliness and dignity (I doubt if many people these days even know what seemly means; it is not a word much in current use).

Of course, indifference to the opinion of others can be a virtue, for example in matters of public significance. Public opinion or conduct may be very wrong, and opposing it an act of virtuous courage (not all courage is virtuous). But this is hardly what the writer means; she means the sheer self-indulgence and egocentricity of giving way to one’s feeling without regard to others, emotional wallowing as an end in itself.

The article suggests various reasons for crying, and presumably for sobbing in public, for example lateness with handing in an essay, or a bad mark. (How pathetic to cry over a bad mark! Surely the mature response is to issue a writ against the teacher who marked you low for breach of contract. No one pays tuition fees, after all, let alone living expenses, to be given bad marks. What other business would dare to treat its customers in so shabby a fashion?)

One swallow doesn’t make a summer, and one article in a student paper doesn’t make a culture. Nevertheless, this eulogy to crying and sobbing—albeit sometimes in public toilets, generally given high marks for suitability as a location, especially when there are people around to give the person who is crying a hug when he or she emerges from the cubicle—seems to me emblematic of a time in which people gain their sense of self by being noticed by others. For what is the point of having an emotion if you do not display it to others? Innerness is a kind of treason to the self.

In human affairs, there is no new thing under the sun. There has always been emotional incontinence, exaggeration, and blackmail. There have always been people whose emotions have been intense but shallow. I remember a neighbor of mine who went in a matter of minutes from suicidal despair to manic euphoria and back again, forgetting the very next day that she had made an exhibition of herself, and evidently expecting me to have done so also. The question, then, is not whether a psychological trait is altogether new (it never is), but whether it is more or less common in the population, and whether a culture encourages or discourages it. There is also the question of whether or not it is a desirable trait.

A population that hesitates not to cry in public is likely to be also a population of many frauds, of many actors and actresses, and of many liars. More dangerously, it will be a population without the capacity for real self-examination; many will no longer be able to distinguish between minor inconvenience and real tragedy, between slight loss and real grief, not only in others but in themselves. It will be a society in which tears will be not only an argument, but a conclusive one; and the more tears the more conclusive.

Above every university entrance, therefore, ought to be inscribed the following words: Thank you for not expressing yourself.