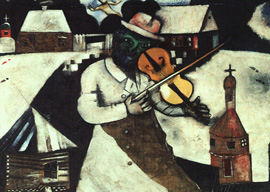 The Fiddler by Marc Chagall

Seinfeld co-creator Larry David did something during his Saturday Night Live monologue this weekend that is almost unknown in 21st-century America: He engaged in Jewish self-criticism in front of gentiles:

A lot of sexual harassment stuff in the news, and I couldn’t help but notice a very disturbing pattern emerging, which is that many of the predators, not all, but many of them are Jews….

I don’t like when Jews are in the headlines for notorious reasons. I want “Einstein Discovers the Theory of Relativity,” “Salk Cures Polio.” What I don’t want? “Weinstein Took It Out.”

Not surprisingly, David’s violation of the contemporary rule—Don’t joke about the Jews—was not well received. For example, from the Los Angeles Times:

It’s hardly surprising that David would be the one to stumble upon this prime directive of contemporary culture: Don’t recognize Jewish patterns.

Both Seinfeld and David’s subsequent HBO series Curb Your Enthusiasm are shows about rules, about the descendants of shtetl dwellers awkwardly adrift in a world without an all-encompassing set of laws itemized in the Talmud. David’s characters are constantly either getting in trouble for violating rules that they didn’t know existed or are outraged that other people aren’t aware of rules that seem obvious to them.

As Larry’s blond wife on Curb explains to him in exasperation after his attempt to enforce his assumption that the cutoff for Halloween trick-or-treating ought to be age 13 ends in disaster:

You know what? Not everybody knows your rules, Larry. You’ve got your own set of rules and you think everyone’s going to adhere to them, but they’re not because nobody knows them.

On SNL, Larry, who is now 70, was appealing to an older Jewish-American rule that the most obvious way for Jews to avoid criticism for stereotypically Jewish failings, such as exploiting shiksas as if they were members of a different tribe, is to try to behave better.

“An intelligent people should be able to sidestep these kinds of self-inflicted disasters.”

Or, if you can’t improve, well, at least don’t be a scold. Or, like David and Seinfeld, invite people to laugh at your scolding.

If, like Dov Charney, founder of American Apparel, you can’t keep your hands off the help, don’t lecture your customers on the immorality of enforcing the immigration laws.

If, like Jann Wenner, founder of Rolling Stone, you have an endless track record of self-indulgent bad behavior, don’t publish Sabrina Rubin Erdely’s self-evident anti-gentilic blood libel of Haven Monahan and his fellow nonexistent U. of Virginia frat boys. Moreover, when you do get sued for libeling innocent people, act apologetic rather than getting up on your high horse during your deposition.

In other words, show some shame. And don’t try to shame everybody else.

Criticism, while painful, tends to be good for human beings in the long run. If you are off-limits from criticism about your most characteristic shortcomings, how would you recognize what you need to work on?

For example, I get criticized a lot, so I try to understand their objections and at least not give them easy ways to score off me.

This old custom among Jews, however, has faded over the half century since roughly the Six-Day War, as American Jews have discovered that the best defense is a good offense. Rather than try to reform, it’s much more convenient to simply denounce all criticism of characteristically Jewish shortcomings as anti-Semitic pattern recognition.

This is not to say that Jews don’t attack other Jews; they do all the time, but typically for not living up to presumed Jewish standards toward other Jews. American partisans of the various political parties in Israel are constantly squabbling with one another over their purported failures to live up to the high standards of Jewish moral superiority.

But admitting to the public, as David did, that a large fraction of the Hollywood moguls in trouble in the current liberal meltdown are Jewish is not done. The New York Daily News headlined: