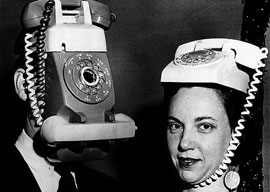 When I was a larval nerdling in graduate school, I allowed myself to be seen in public places with a ridiculous pocket computer in a hip holster. It was a tremendously useful device for a physics graduate student. This compensated for the opprobrium rightly hurled at me by people less touched by the dork side of the force. It came with the ability to do symbolic integrals and work out the Feynman diagrams. I could also check email, run a Web browser capable of accessing the AltaVista search engine, and write useful software I’d upload to the school’s Cray supercomputer. I kept notes and “to do” lists on the thing and even managed to read the Iliad on it. It was a most useful, if nerdy device, rightly relegating me to the outer limits of social respectability in the mid-1990s.

Regardless of my early exposure to its predecessors, I hate the “smart” phone. Smart phones, despite being vastly more computationally powerful than my old pocket computer, are dumb. Other than a few people with unusual jobs, no human being on planet Earth needs a networked computer with a camcorder in their pocket. Certainly no civilized person needs to be mainlining the Internet machine all day.

“People feel lost without looking at the world through an electrical version of a toilet-paper tube.”

Despite usurious “data plans” and preposterous sticker prices, nobody seems to be able to do without the doofus things these days. People feel lost without looking at the world through an electrical version of a toilet-paper tube. People fiddle with them incessantly. The average user has a relationship with his telephonic device not unlike that between Gollum and his precious. I call them “nerd dildos.”

People wonder how I live without a priapic doodad serving me constant advertising and tracking my every move. It is easy. Unencumbered with a $500 target for thieves and $100-a-month “data plan” bills, I worry less about my finances. When I need to meet someone, I agree to a time and place in advance and meet them there. If I’m going to be late, I call them on my $10 telephone. If they require constant “text message” reassurances that I’m actually going to show up, I don’t want anything to do with them anyway. Should I need directions, I use the ancient invention known as the map to find out where to go. Should I get lost on the way, I use the even more antediluvian invention known as spoken language to ask someone where I am. Neither technology requires data plans or battery chargers.