Dancing on a Hero’s Grave 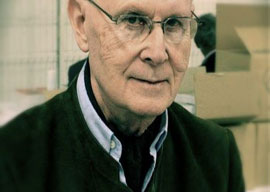 As a college student I would buy copies of The New Yorker to sample the sparkling prose of James Thurber and S. J. Perelman and to appreciate the clever cartoons that graced each issue. Despite the magazine’s veering toward the trendy left thereafter, I could still find material in it worth reading well into the 1980s, such as John Updike’s elegantly phrased erotica or the occasional vignettes of interwar Hungary by John Lukacs. Then The New Yorker took a further slide into sheer madness, and the results are visible in a libelous obit that came out last Wednesday by a certain Judith Thurman. Seething with rage syndrome, Thurman announced the “Final Solution” of my onetime correspondent and one of France’s most illustrious historians of the last century, Dominique Venner (1935-2013).

On May 21, Venner, acting desperately in the face of events he could no longer control, committed suicide by shooting himself in the mouth in Notre Dame Cathedral in Paris. Venner left behind a suicide note explaining his horror at the gay-marriage law that French President Francois Hollande had just pushed through the National Assembly. Venner further lamented the self-destruction of his country and of European civilization that he ascribed to gay marriage and to Western Europeans” unwillingness to keep Muslims from resettling their countries.

“Venner, acting desperately in the face of events he could no longer control, committed suicide by shooting himself in the mouth in Notre Dame Cathedral in Paris.”

It continues to be disputed whether Venner was a believing Catholic, although the “Catholic traditionalists” in whose company Thurman places Venner admired his cultural stands and continue to hope that he”ll make it into heaven despite the mortal sin he committed by hastening his departure from this world.

Venner was also a hero to the neo-pagan European right, and since the 1960s he was active in laying and extending the foundations of the emphatically anti-Christian French new right, together with his frequent collaborator Alain de Benoist. Venner had a clear record of standing defiantly in the face of the French Communist Party. Unlike the communists and other French leftists who supported the Algerian rebels, Venner fought gallantly and was decorated as a sergeant in the French forces in Algeria.

Contrary to what Thurman tells us, Venner did not get his political start as a fan of the Nazis and their French collaborators (although his parents had once rallied to Jacques Doriot’s French fascist party). He rose to fame as a fervent anti-communist and European nationalist. The young Venner risked his life as a volunteer in the Algerian War, went to Budapest in 1956 to stand with the outnumbered Hungarian rebels against the Soviet occupational forces, and later was caught sacking the premises of the French Communist Party, whose allegiance to the Soviets he detested.

In the last twenty years of his life, this “unapologetic Islamophobe,” to use Thurman’s phrase, showed the audacity to characterize both the takeover of European inner cities by a hostile Muslim population and “the declining white birthrate in France and Europe” as “a catastrophic peril for the future.” Several blog respondents to this screed noted the embarrassing coincidence that Thurman’s expression of rage against the “Islamophobe” Venner appeared at the very time that predominantly Muslim riots had broken out in Sweden and a Muslim convert cut off the head of a hapless off-duty soldier in London.