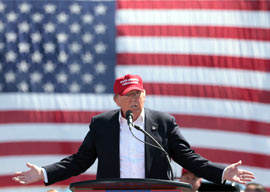 You’re dead stupid, too, Shaun, but that’s a matter for another article.

But in his mental simplicity, Shaun King is very instructive: He calls Trump “dangerous,” yet he threatens to support a “coup” if Trump is elected president.

Why is it dangerous to say that America is being inundated with illegal immigrants, many of whom are rapists and gang members? What’s so dangerous about blaming global finance for offshoring America’s manufacturing base and allowing unchecked immigration to drive down wages? How is it remotely dangerous to plainly state that a high quotient of Muslims are innately hostile to Western values? What is the danger in stating that political correctness is a distraction at best and a cancer at worst?

My dark and fearful suspicion is that the hyperbolic hysteria of the anti-Trump squads is merely an egregious and extended act of mass projection. The “danger” of which they speak is their infantile reaction should Trump be elected. Based merely on their insane reaction to his candidacy, I do not expect them to react maturely. The implied threat here seems to be “If you elect him, we will riot in the streets.” Sounds a mite dangerous to me.

Based on the ruling global elites’ seething, unmasked, and unanimous hatred for alleged hatemonger Donald Trump, I suspect that the main danger he represents is to their power and comfort. Globalism is Manifest Destiny for bankers, and Trump stands in their way.

For the anti-Trumpers outside the One Percent, those brainwashed peons who view Trump as the embodiment of human evil, he also presents a significant danger”he threatens to destroy the false egalitarian dreamland that’s been drilled into their heads since infancy. But it’s a fake world anyway, and it needs to be destroyed because it’s highly dangerous to sculpt public policy and sustain a culture based on false premises. The death toll of the 20th century’s egalitotalitarian regimes”the ones who weren’t Nazis, the ones they never tell you about”is a grim reminder of such dangers.

So yes”Donald Trump is dangerous, but in the best possible way.