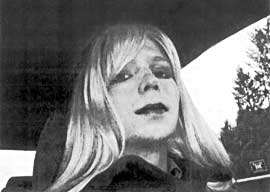 Political correctness, that great misguided ennobler/enabler of disgruntled losers and embittered misfits, may have helped pave the way for Bradley Manning and Nidal Hasan to achieve infamy.

Before his decision to start leaking highly sensitive military information to svelte albino panda cub Julian Assange in 2010, Bradley Manning gave his Army superiors every reason to suspect he was a mentally unstable and potentially violent homosexual who was perhaps too emotionally hypersensitive to be trusted with highly sensitive documents.

Before he decided to blow away a baker’s dozen (plus a bun in the oven) with two handguns at Fort Hood in late 2009, Nidal Hasan gave his Army superiors every reason to suspect he was a jihadist turncoat gunning for his 72 virgins because he had trouble getting laid.

(Full disclosure: Not for a moment have I approved of the US military’s foolhardy forays into the Middle East. If I had my druthers, I’d bring all the boys”and they’d all be boys, meaning no girls and definitely no boys who suddenly decide that they’re girls”home to guard the true national-security threat, the one along the Mexican border. Before any of you perpetually sour-pussed pea-picking peckerwoods in the peanut gallery start grousing that I’m some sort of neocon, allow me to sternly instruct you that it’s possible to simultaneously disapprove of Islam and Zionism. It is also possible to deplore American military expansionism while being concerned about the fact that bullied loners and cultural outcasts lurking within the armed forces can throw tantrums and endanger American lives because people are terrified of calling them fags and/or ragheads.)

“Hasan was a solitary worm burrowing deep inside a military-industrial apple that refused to stop him for fear of being deemed wormophobic.”

It appears beyond question that inadequate screening and culturally masochistic Islamo-tolerance allowed Nidal Hasan to claim American lives. Whether you view Bradley Manning as a hero or a heel is largely a matter of taste, but on August 14, he claimed his actions led to “unintended consequences” and had “hurt people.” That comes straight from the little sparkle pony’s thin lips.

By the way, his name is Bradley Manning, and he’s a guy. To claim he’s suddenly a chick is to deny biological reality. Last Thursday, the day after being sentenced to a 35-year prison bid, Manning issued a statement containing the following gems:

As I transition into this next phase of my life, I want everyone to know the real me. I am Chelsea Manning. I am a female….I also request that, starting today, you refer to me by my new name and use the feminine pronoun….

NO, dude. And as a preemptive strike, I also rule out the possibility of ever calling you Bradley Womanning.

Still, several major news outlets immediately swapped out “he” for “she” and “his” for “her.” If you type “Bradley Manning” in Wikipedia’s search box, it redirects you to a page for “Chelsea Manning” that features such head-scratching passages of abject reality-denial as this one:

Manning was by then living as an openly gay man. Her relationship with her father was apparently good….

Long before he was deployed to Iraq and divulged a flood of state secrets, Manning revealed himself to be quite the fragile orchid. When he was 13, his stepmother reportedly observed him running into walls and declaring, “I’m nobody now.” In 2006 he allegedly threatened her with a knife. In August 2009 he was referred to Army mental-health counselors after reportedly crying for hours after watching the films The Last King of Scotland and Dancer in the Dark“a sure sign of mental instability by any objective standard.

In 2009, two months after being sent to Iraq with a security clearance, Manning angrily flipped over a table during a counseling session, damaging a computer. During this hissy-fit, he had to be restrained by another soldier from grabbing a gun from a nearby gun rack and was dragged out of the room. Still, his security clearance remained intact.

Before he started blowing whistles, Bradley Manning was obviously blowing other things. Despite the “Don’t ask, don’t tell” policy that was in effect at the time, Manning was apparently telling everyone who’d listen that he was gay. Perhaps even though Manning was eager to “tell,” no one wanted to risk the appearance of having asked. He reportedly told his roommate he was gay, at which point his roommate allegedly instructed Manning to stop talking to him. Manning divulged the ins and outs of a failed gay relationship on Facebook. He was even said to have kept a fairy wand at his desk. At a pre-trial hearing, Army officials claimed they were fully aware that Manning had also created a female alter ego he called “Breanna Manning.”