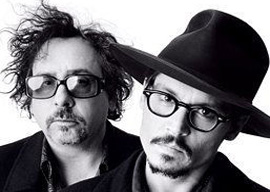 Henry: I never went for him much. “All Shook Up” was the last good one. However, I suppose that’s the fate of all us artists.
Debbie: Death?
Henry: People saying they preferred the early stuff.

Because film director Tim Burton works in a fairly narrow groove of style, subject, and cast, his career offers an unusually clear opportunity to consider why people prefer the early stuff. His fifteenth feature, horror comedy Dark Shadows, with Johnny Depp as a courteous 18th-century vampire who comes back to life in 1972, isn”t all that different from 1990’s Edward Scissorhands, the first of Burton’s eight movies with Depp. (It’s also Burton’s seventh with his girlfriend Helena Bonham Carter in a supporting role.) Dark Shadows is about what you”d expect.

And that raises the question: Would the 2012 film seem better than Edward Scissorhands if the pair had been switched at birth, with Dark Shadows premiering in 1990? Might audiences yet unborn someday prefer Shadows to Scissorhands the way the 1956 John Ford-John Wayne collaboration The Searchers is slowly edging out the pair’s initial effort, 1939’s Stagecoach?

“The most memorable artists compete in our minds against their younger selves for our affections”a battle that’s hard to win.”

There are two main reasons why audiences generally prefer the early stuff. The first is a Darwinian selection effect. If Stagecoach had been bad, Ford and Wayne wouldn”t have made another 23 films together. The second is that much of what we like about artists is less their creativity than the freshness of their unique personalities. The most memorable artists compete in our minds against their younger selves for our affections”a battle that’s hard to win.

Burton is either deeply loyal to his actors or very shy about meeting new people, For instance, after comic actor Michael Keaton’s over-the-top performance made Beetlejuice a hit in 1988, Burton perplexingly cast the unimposing Keaton as Bruce Wayne. Like most of Burton’s eccentric choices, Batman turned out financially fine.

Burton is a brand-name director sui generis. After growing up a weird kid in Burbank, he went on to make stylized, idiosyncratic movies which haul in bundles of conventional cash. Domestically, he’s the eighth-highest-grossing director ever (not accounting for inflation), and lately he’s done even better overseas. Since the Burton-Depp-Bonham Carter trio’s last outing, Alice in Wonderland, made a billion dollars worldwide during 2010’s 3-D fad, Burton garnered a $150-million budget for Dark Shadows.