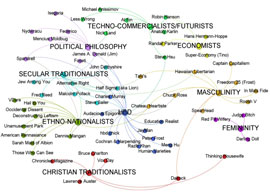 “Never darken my door again” was the standard Victorian parting shot to a person you wanted to be rid of. (It was adjusted in one of Bridget Jones’s diaries to: “Never darken my towels again.”)

In case it slipped your attention”perhaps because you haven’t been reading my output assiduously enough“there has for six or seven years been a movement afoot to darken the door of the liberal commercial-democratic order ushered in by the Enlightenment.

It calls itself the Dark Enlightenment. “Endarkenment” would have been crisper, but Roger Scruton has already adopted that term for a somewhat different purpose. The Dark Enlightenment is, so far, a critical movement, with no particular intent to endarken individuals. They just want us to be aware that the Enlightenment had a dark side and that the modes of thought and society that it steered us toward might lead ultimately to a dark place, an antithesis.

At least I think that’s what they want. The most-spoken-of among the Dark Enlightenmenteers”Nick Land and Mencius Moldbug“are prone to earnest philosophizing: the kind of stuff of which, for me, a little goes a long way.

“Good grief! I can hear the distant stomp of jackboots already!”

And I guess I should drop the third-person pronoun in talking about the movement. A few months ago the blogger Scharlach (German for “scarlet”) drew up a very handy diagram of the movement, with participants grouped according to their major themes. At 11 o’clock on the diagram, grouped with Secular Traditionalists, is me. (Or possibly “…am I.” Please don’t email in to tell me.)

So Derb-wise, the Dark Enlightenment is not a “they,” it’s a “we,” although as a chronic non-joiner, I’m probably going to have trouble being consistent about that.

What’s it all about, Jamie, this Dark Enlightenment?

The neo-fascist bit lies in the view that races aren’t equal (they obsess over IQ testing and pseudoscience that they claim proves racial differences, like the Ku Klux Klan) and that women are primarily suited for domestic servitude.

I didn’t know that races obsess over IQ testing, etc., but let that pass.

Having got your flesh creeping, Jamie (really? Jamie?) closes with soothing reassurance: “I’ll be keeping an eye on them, and report back here with any interesting developments as they happen.” Thank you, Jamie! Who knows what pit of horror our society might fall into without brave souls like you, ever vigilant!

Who is this Jamie person? The indispensable hbd* chick tells us. Jamie…

…is at the UK think-tank Demos. (Demos was founded by a guy who had been editor of Marxism Today, the “theoretical magazine of the Communist Part [sic] of Great Britain.)”

Two days later, while your flesh was still creeping, a different bloke, name of Tim Stanley, followed up with more reassurance. Nothing to be too frightened of, he murmured emolliently: “The ‘neo-fascist’ Dark Enlightenment is more sad than scary.”

Phew! So those weren’t jackboots I was hearing, only the compulsive thumping of neurotic fingers on worn keyboards in some loser’s dad’s garage. We won’t be needing those Moroccan visas after all, Honey.

Not that Tim thinks Jamie is altogether mistaken.