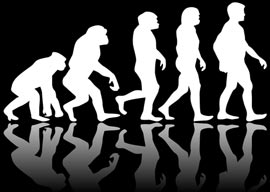 It has become a press custom to ask Republican presidential hopefuls, such as Wisconsin governor Scott Walker, whether they believe in Charles Darwin’s theory of evolution. The intention is to trap the politicians between their Biblical literalist supporters and the prestige of Science with a capital S.

Still, Darwin’s ascension in recent decades to his current role as the saint of secularism might raise obvious questions about liberal dogmas, such as the impossibility of hereditary differences having evolved among human races. But those seldom come up, because progressivism has evolved a bizarre yet apparently reassuring theodicy reminiscent of Zoroastrian dualism, in which Ahura Mazda represents all that is good and Angra Mainyu all that is bad.

Similarly, Charles Darwin has come to epitomize everything that a proper progressive should believe, while Darwin’s younger half-cousin Francis Galton embodies crimethink.

For example, a March 1, 2015 article in the Guardian by Adam Rutherford declares:

Why racism is not backed by science: As we harvest ever more human genomes one fact remains unshakeable: race does not exist. … Darwin was not a racist. … However, Darwin’s half-cousin Francis Galton, most certainly was a racist. … Most modern geneticists are much less like Galton and more like Darwin.

This contemporary ritual of scapegoating Galton for the political sins of Darwinism raises the question of what Darwin (1809 “ 1882) thought about Galton (1822 “ 1911).

“Charles Darwin has come to epitomize everything that a proper progressive should believe, while Darwin’s younger half-cousin Francis Galton embodies crimethink.”

A short 2012 biography”Darwin: Portrait of a Genius, by the prodigious journalist and historian Paul Johnson”offers a less fawning evaluation of Darwin than we”ve become accustomed to seeing in recent decades.

Johnson is best known in the United States for his stunning 1983 history of the 20th century, Modern Times, written after his switch from Labour to Tory during the tumultuous mid-1970s. (Tom Stoppard’s 1978 play about foreign correspondents, Night and Day, is dedicated to Johnson.) But now I like best Johnson’s 1972 history of the English people, The Offshore Islanderswritten from an idiosyncratic socialist patriot viewpoint that had otherwise largely died with George Orwell.
Modern Times conclusively decided the old debate over whether narrative history requires exact dates: a simple reality test for any theory of cause and effect is that the former precedes the latter in time.

Johnson’s memory for dates, insightful quotes, and amusing anecdotes is perhaps the most capacious of any English-language journalist of our time, exceeding even that of the late Christopher Hitchens. Johnson’s colossal mental database, combined with his talent for pattern recognition, makes his books a stimulating combination of history and opinion journalism.

On the other hand, Johnson’s knack for hypothesis generation is so fertile that he never really has time to prove his ideas conclusively before he’s off to the next one. Thus, he doesn”t write definitive books, he writes provocative ones.

For example, his enormous 1991 volume The Birth of the Modern: World Society 1815-1830 was theoretically organized around his thesis that the modern world began in the 15 years following the Battle of Waterloo. But that imponderable notion was mostly an excuse for Johnson to brain-dump all the best lines he”d stored up from the Duke of Wellington, Jane Austen, and Lord Byron, and the larger patterns they imply.

Now in his mid-80s, Johnson has switched from writing doorstop tomes to short Penguin biographies of extremely famous people such as Churchill, Mozart, Jesus, and Socrates.

Back in the 20th century, I complained to a Penguin salesman about the craze for 900-page bestselling biographies that told you more about some famous guy than you cared to know. What the market really wants, I explained, are short biographies by outstanding writers giving their opinion of a predecessor. Who cares about original research in dusty archives? Just have a good author read ten books and write an eleventh. This idea can”t miss!

I was so persuasive that I wasn”t surprised when a few years later Penguin did exactly that, inaugurating the Penguin Lives series featuring simpatico pairings of writers and subjects, such as Larry McMurtry’s Crazy Horse and Johnson’s Napoleon.

I was surprised, however, when Penguin’s venture proved a major dud“but I guess that’s why I was in marketing research rather than in marketing.

Johnson, however, soldiers on, writing short books about big names.

One recurrent feature in Johnson’s books is that he’s never quite satisfied with the great men and great achievements of the past. Johnson tends to come up with science-fiction-style alternative histories of how if only they”d known then what we know now …

In part, Johnson’s alternate reality approach is due to his English chauvinism: it pains him that Britain didn”t dominate the 20th century the way it had dominated the 19th, and he”d like a do-over. In The Birth of the Modern, for instance, Johnson unsurprisingly laments the failure of the well-funded attempt by Charles Babbage and Lord Byron’s daughter Ada Lovelace to build a steam-powered computer that would have propelled Victorian Britain from the industrial age into the information age. But he also complains, more idiosyncratically, that the Duke of Wellington’s Britain invested too heavily in the locomotive and should have pioneered the automobile as well.

Similarly, the title Darwin: Portrait of a Genius is ironic. Johnson is more intent upon pointing out Darwin’s shortcomings than writing yet another celebration. For example, Darwin, unlike Galton, was poor at math. Nor could he draw, which would have been hugely useful in illustrating his works. Darwin had the money, Johnson points out, to have hired a bright young man who was good with numbers and Continental languages to have assisted him, but preferred his privacy to work on his numerous collections.

Johnson is particularly concerned with Darwin’s failure to read, or replicate on his own, Gregor Mendel’s 1866 publications outlining the basics of genetics, which weren”t appreciated until 1900:

The missed opportunity is of the greatest importance, for in 1866 Darwin had a decade and a half of good work ahead of him. If he had been apprised of genetic theory, then he could have entered a new world of discovery.

Johnson sums up with his characteristic certainty:

Throughout his long life, Darwin was an extremely lucky man. Of all the great scientists in history, he was most favored by fortune.

Readers may wonder how Johnson knows this to be true, since he doesn”t laboriously enumerate all the bad luck to befall every great scientist since Thales. On the other hand, Johnson’s seeming assertions off the top of his head are always worth listening to, since nobody has random access to more historical information.

The one more consistently fortunate scientist whom I can think of than Darwin was Benjamin Franklin. And Franklin was only a great scientist for about a decade in the middle of his life when he worked out electricity and anticipated Thomas Malthus’s doctrine in economics, before being distracted by affairs of state.

If I might venture my own Johnsonian alternative history: if Franklin had been even luckier, he might also have anticipated Darwin’s theory of natural selection. After all, Darwin’s breakthrough was inspired by his reading Malthus’s reflections on Franklin’s 1754 finding that the American population doubled every 25 years.

But this low-hanging fruit was left to be plucked by Darwin, who enjoyed, as Johnson points out, the ideal combination of nature and nurture for the task. Both his paternal grandfather and father had been among the highest paid doctors in England, while his mother was a Wedgwood. British upper-class culture, with its emphasis on hunting, animal breeding, scientific agriculture, and the dispersion all over the countryside of learned men as vicars, put intellectuals in closer touch with nature than in most other times and places. Thus, Darwin was the Neil Armstrong of naturalists: the product of a system that worked well. But if not Darwin, somebody similar would have gotten the job done.