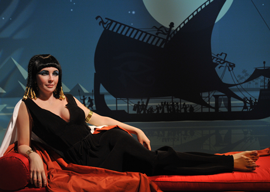 The reading habit began early, with the Greek myths and Homer. It got really bad after having been on the French Riviera with my parents when I was 14. I spent that winter locked up in boarding school; during study hall, a teacher, Mr. Barrett, whose face had been disfigured by burns after crashing his bomber somewhere in Germany, caught me reading a book under my desk instead of doing my algebra.

After graduation, the only thing I wanted to do was play at Wimbledon then return to the Riviera and find Dick Diver. In a way it ruined my life, the search for Fitzgerald characters, as all I came up with were bland Italian playboys, English upper-class moochers, and vulgar Argentine Romeos. Oh, and some very dull and rather dumb international millionaires. But I kept looking.

“Yes, they were beautiful and damned, as was the great Papa, who influenced me even more and had me chasing glory”I never found it”in Vietnam and the Golan Heights.”

Salinger’s Catcher was the first novel to, how shall I put it, knock my socks off, but J.D. was a one-off. The spell cast by Gatsby and Diver has remained to this day. The constant Fitzgerald theme is always with me, dazzling and dangerous, corrupting the innocence, falling short of the dream. The vast carelessness that Fitzgerald ascribed to the very rich perked up my ears, and looking around me I could almost touch it. He and Zelda frolicked nonstop in a vain effort to escape from themselves, and their life was a lyrical retelling in “Babylon Revisited,” as well as in Tender.

In 1959, an Italian girlfriend asked me to dine with David O. Selznick and his wife, Jennifer Jones. He was planning to produce Tender, so I popped in with a few suggestions. William Holden as Dick, Joan Fontaine as Nicole, and Liz Taylor (back then still thin) as Rosemary. “Young man, you get me those three and I”ll give you ten percent of the gross,” said the maker of Gone with the Wind. He did make the movie, with Jason Robards and Jennifer Jones, and it was a disaster. Robards was a depressive presence, with none of Diver’s vibrancy or charm.

Yes, they were beautiful and damned, as was the great Papa, who influenced me even more and had me chasing glory”I never found it”in Vietnam and the Golan Heights. Manhood and corrupted idealism were constants between Papa’s and Scott’s fiction, the former more about the beauty of nature, the exhilaration of fishing and big game hunting, the masculine life. Papa was the first pop star and he was, as Norman Mailer would call him after his death, the “heavyweight champion” of American fiction.

Incidentally, Norman Mailer was a good friend of mine, but before knowing him I had read An American Dream and realized that Mailer was a downtown Fitzgerald and an urban Hemingway. Ironically, about 25 years ago, I ran a sort of literary salon out of my New York town house, with Norman presiding at the head, and Jay McInerney, Bret Easton Ellis, and Morgan Entrekin dropping in regularly for dinner. Jay’s Bright Lights, Big City was as Fitzgerald as they come, circa 1980. As was Bret’s Less Than Zero. Norman is gone, Bret lives in El Lay, and Jay’s married to one of the nicest as well as richest women on earth, so there goes my literary salon.

Why don”t I read novels anymore? That’s an easy one to answer. That most novelists today were given writing lessons at an early age I find a shocking case of child abuse. Their work sounds like atonal music, or modern music for that matter, a cacophony of Freudian slang mixed with comatose magic realism that makes as much sense as a Basquiat selling for 20 million greenbacks.

Writers no longer write in the manner in which people speak, and it’s no wonder. No one speaks any more, they text and blast rap music. Has any writer ever had a better ear than J.D. Salinger? John O”Hara, Damon Runyon? Novels are like paintings and pieces of music: written or painted or composed by individuals in lonely little rooms. Not by specialists and gimmick hustlers who want to please their fellow promoters.