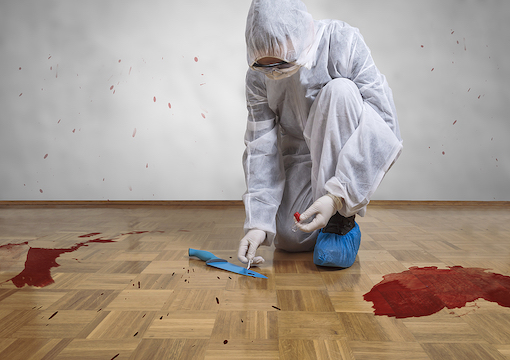 DNA evidence has now shown with greater than 99.9998% probability that Bryan Kohberger was the man who murdered four University of Idaho students in the early morning of Nov. 13, 2022. His capture illustrates why there will be no more serial killers. As the world gets worse in so many ways, here’s one way it’s better. (Unless the ACLU gets its way.)

Between the ubiquity of surveillance cameras and DNA, any budding Ted Bundy can commit one hideous murder, but then he’ll get caught. No more victims cut down in the prime of their lives, destroyed families or terrified communities. Monsters like Kohberger get one shocking crime, not a series.

It’s nearly impossible not to leave your DNA on something, particularly in the middle of a frenzied attack. It seems that Kohberger, a Ph.D. student in criminology, left his DNA on the button of a knife sheath, found next to one of the dead bodies. By following Kohberger and examining his trash, forensic scientists were able to establish that his father was 99.9998% likely to be the father of the person who committed the murders.

“Monsters like Kohberger get one shocking crime, not a series.”

Good luck poking a hole in that, ACLU!

There were loads of other clues, but those would have gone unnoticed without the DNA pointing to Kohberger in the first place. Moreover, the other evidence might be enough to convince any non-O.J. juror, but would have led to decades of law professors, nuns, chubby coeds, New York Times reporters and other murder activists howling that Kohberger was “innocent.”

— Kohberger’s white Hyundai Elantra was seen on camera speeding away from the crime scene on a quiet residential street shortly after 4:20 a.m. on the night of the murders.

— Cellphone data showed Kohberger going past the murder house a dozen times in the three months before the crime and, most suspiciously, again at 9 a.m. the next morning, before the police had even arrived.

So? He’s a driving enthusiast.

Duh! Heard of the pandemic? He’s just a dutiful citizen.

— Police observed him fanatically cleaning his car after the murders — he didn’t “miss an inch.”

— He put his family’s garbage in the neighbor’s bin.

Anyone could get confused about garbage bins late at night. That doesn’t make him a murderer.

But with science proving beyond doubt that Kohberger’s DNA was on the knife sheaf found next to the corpses, the fantastical excuses of the murder lobby are so much hot air.

So why aren’t the police and FBI bragging their heads off about the forensic genealogy that got them to focus on Kohberger?

Sure, they were looking for a guy with a white Hyundai Elantra, but there are 22,000 white Hyundai Elantras registered in Idaho alone — and Kohberger’s wasn’t one of them. He lived 10 miles away, across state lines in Washington. Why were the police looking at his cellphone data, his behavior and his trash, and not that of the other 22,000 Elantra owners?

As Heather Tal Murphy writes in Slate: “Though multiple news outlets, including CNN and ABC News, reported that forensic genealogy helped with the case, none have explained exactly how it was used or why it did not appear in the affidavit.” (Emphasis mine.)

I think I know why they haven’t explained! Law enforcement doesn’t want to sic the murder lobby on whichever genealogy service helped catch an infamous murderer.

In a sane world, these genealogists would be taking a bow, accepting the eternal gratitude of the victims’ parents and everyone living in Moscow, Idaho, as well as the dozens of future victims this butcher will never be able to kill now.

Instead, they’re about to have the murderer lobby screaming at them for violating a psycho killer’s “privacy.” The pro-murder crowd has already intimidated the largest DNA database, Ancestry.com (owned by Blackstone Group), into refusing to help law enforcement solve murders. 23andMe also refuses to cooperate with murder investigations.

All this so that some jackass on a law faculty can say, Hey, congratulate me! I just hamstrung the police in their ability to catch the provably guilty!

Just know that, while you are sleeping peacefully tonight, secure in the knowledge that a thrill killer has been taken off the streets, liberals are hard at work to make sure the next one gets away.