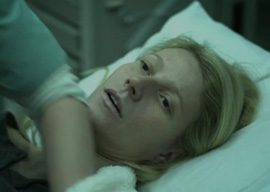 Ever since Oscar-winner Gwyneth Paltrow started her website Goop.com to let people know about all the expensive stuff she owns, many have wanted to see her portray, say, a corpse who gets the top of her skull sawed off by coroners trying to figure out what brain-rotting disease killed her. And Gwyneth, I’m happy to say, is terrific as Patient Zero in Contagion, which is being marketed as a vast thriller about a global viral epidemic. I definitely got my money’s worth from the Paltrow head-hacking scene.

The first half, in which several of Contagion’s eight Oscar nominees (Paltrow, Matt Damon, Kate Winslet, Marion Cotillard, Jude Law, Laurence Fishburne, John Hawkes, and Elliott Gould) drop dead from a new southeast Chinese germ transmitted merely by contact, is almost as creepy as promised. You’ll want to watch Contagion through a couple of eyeholes in a large upside-down plastic garbage bag. Granted, that doesn’t sound comfortable, but the alternative is touching things that thousands of other moviegoers have touched.

Should you want to go see Steven Soderbergh’s Contagion? Hard to say. It’s informative enough that Cameron Diaz’s Bad Teacher could reasonably justify showing the DVD to her middle-school biology class while she napped away a hangover.

“You’ll want to watch Contagion through a couple of eyeholes in a large upside-down plastic garbage bag.”

The only sensationalized scientific aspect is that it leaves out the good news that lethal germs rapidly evolve (usually) to be milder because there’s no Darwinian profit in killing one’s host. Dead men don’t cough. (The main exceptions are diseases spread by insects, such as malaria.) The horrendous Spanish flu of 1918 evolved malevolently perhaps because the sickest soldiers, rather than stay home alone as ill civilians do, were instead packed on trains to huge military hospitals.

Indeed, Contagion is so hyper-responsible that the bad guy is an alternative-medicine blogger played by Law. (You can tell he’s evil because he has crooked English teeth.) Contagion’s political message is: When somebody tells you, “I’m from the government and I’m here to help,” trust him.

Critics are raving about how Soderbergh and screenwriter Larry Z. Burns dispense with all those timeworn Hollywood tricks such as action, suspense, plot, emotion, and characters you care about. Who needs all that?

Soderbergh evidently does, because after Paltrow’s autopsy, momentum dissipates as Contagion is revealed to be a half-vast non-thriller. Overall, Contagion isn’t bad, but in the same amount of time you could watch an episode of House M.D. and a NOVA documentary about bird flu and be more entertained and enlightened.