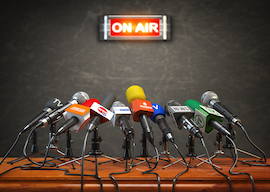 The great pundit James Bowman recently said, “The biggest mistake conservatives make is to suppose that Democrats control the media. In fact, the power relationship is the other way around: The media control the Democrats.” His remark sheds light on the convulsions going on in the Democratic Party right now. There’s a power struggle in the media for who will set the agenda and issue orders. The resulting confusion is trickling down to Democrat politicians, who aren’t sure how and to whom they’re supposed to submit these days.

This power struggle accelerated at the beginning of this decade with the media class moving to Twitter. As a platform, Twitter is an intellectual’s dream because words and rhetoric are untethered from action and results there. It’s the ultimate literary coffeehouse. As the media migrated to the forum, they underestimated the volatility that occurs when intellectuals from all walks of life (but especially academics who dreamed of jobs in the media) are suddenly on equal footing.

Twitter dislodged the left-wing media hierarchy and soon self-important pundits were calling for comment sections to be removed. They were up against people who in an earlier time were called anonymuncules—a Latin word for a “nameless little man.” The media were shocked to see their public talking back to them. Even worse, not all of their detractors were harmless randos, but many of these anonymuncules were bitter agitators from academia who had learned petty infighting during their time in Humanities departments. For years the media had thought the internet was a technological utopia, and that access to information and easy communication would create a better, kinder world. Here they saw how envied and unloved they were.

After their mistake in letting the masses talk back to them online, the media would retreat from their utopian rhetoric about the online world. Now the media would say the internet was full of Nazis and that systematic changes were needed to separate Real News from Fake News. The time had come to reclaim their authority over the masses.

It was too late. Many old-school liberals were out, and young radicals were in. The people who used to rule media (many were moderate liberals, who are now called “neo-liberals”) were not “people of color,” and they were not young. It was a world of Bill Mahers supporting Joe Bidens. People who believed that advocating for gay marriage and hating people in Alabama would forever make them the left’s avant-garde.

“Why did miserable academics and underemployed millennials lust for control of the media? The question answers itself.”

A good example of this changing dynamic is from weeks ago, when there was controversy over Beto O’Rourke’s candidacy announcement video. Feminists on Twitter were seething because Beto’s wife, Amy, did not speak during her husband’s announcement but sat silently next to him with their children. Bill Maher fired back at Beto’s far-left critics on Twitter: “I see Twitter got made [sic] because Beto’s wife didn’t talk during his announcement. You’re right, he’s a sexist monster, we’re better off with Trump. To my FarLeft friends: you’re doing it again. Amy can talk or not, her call, but you need to shut the f— up.”

These types of older, left-wing (but not too left-wing) media figures have become pariahs with younger, more progressive millennials. In Maher’s former place is someone like April Reign. It was April who popularized the #OscarsSoWhite Twitter campaign in 2015, criticizing the Academy Awards for not being diverse enough. Coming from a background as an activist and graduating from the University of Texas School of Law, she now travels as a speaker and works as a consultant on “diversity, inclusion and representation issues.” This past year she even attended the Oscar ceremony in Los Angeles.

In many cases, these younger leftists only stayed in higher education because there were no jobs for them when they graduated during the late-2000s recession. Their additional time in school further soured them on the American way of life. The temper of the time is compounded by the millennial increase in depression and social anxiety. Millennial unhappiness is aggravated by an extensive stay in higher education. It’s in school that they’re first taught to blame the evil three (the patriarchy, late capitalism, white supremacy) for all the sin in the world. As Dr. Dalrymple has said, “No group is more dangerous than the disgruntled literate.”

Why did miserable academics and underemployed millennials lust for control of the media? The question answers itself. There is a subtle subplot to this, however: Those in higher education would rather be working in entertainment. Or at least attending the Oscars like April Reign did. As it is, they’re stuck in colleges talking about old books, but they’d rather talk about pop music or Marvel movies, so they take to Twitter to complain about the lack of wokeness in pop culture. They present problems to Hollywood with themselves as the answer. They say, “Hollywood, hire us to make your films and sitcoms even more politically correct or we’ll give them bad buzz online, hurting business. We’ll gladly write the next James Bond to be a woman, or a pansexual refugee, but we’ll settle for providing screenplay notes and a visit to the set.”

They grew up in this era of mass juvenilization. They dream of applying their academic credentials to showbiz, and resent that while some people get to go to Comic-Con, they have to attend academic conferences. They’d ideally spend their time thinking about ways Captain America and Superman could finally team up (a merger of Disney and Warner Bros. would be a start) rather than think about something Walter Benjamin once said on his ninth cup of coffee.

The left’s embrace of pop culture is a unique turn. Previous generations of radicals believed American pop culture was a type of prolefeed meant to distract the proletariat from the brutal realities of modern life. The mid-20th-century critic Dwight Macdonald, who was once called comrade by Leon Trotsky, wrote of popular culture, “Masscult is bad in a new way: it doesn’t even have the theoretical possibility of being good…. The production line grinds out a uniform product whose humble aim is not even entertainment, for this too implies life and hence effort, but merely distraction.” Macdonald would’ve marveled at left-wing intellectual Ta-Nehisi Coates, a writer for The Atlantic, deciding to leave punditry to write Black Panther comic books.

The change is that the modern leftist believes, and believes correctly, that capitalist mass culture can be co-opted for leftist indoctrination and for their own economic benefit. T.S. Eliot’s “Distracted from distraction by distraction” has gone from an indictment of modern living to why leftists cheer it. Why else do they inject pop culture and media commentary with Marxist critical theory? A Marxist might say that it’s in their class interest to do so. By making Frankfurt School dogma (“critical theory”) a crucial component of entertainment, they ensure you should know critical theory to get a job in entertainment. They’re making their useless knowledge and degrees indispensable to production.

By now, academics and the politically correct know they can browbeat Hollywood into giving them jobs and fifteen minutes of fame. However, some Hollywood players know how to counter this. For instance, Mad Max director George Miller (at the time a 70-year-old straight white male) still received acclaim for his traditional action movie Mad Max: Fury Road because he let feminist writer Eve Ensler visit the set and talk to the actresses. The key adjustment, at least for now, is to pretend to take notes from these radicals. Let them visit the set and feel important, and then go back to doing whatever you were always going to do. Just make sure they’re told you couldn’t have done it without them.

This Hollywood-destroying aspect is leading to backlash. It’s exhausting critics, and thin-skinned millennial celebrities are now rebelling against even the concept of criticism.

Through Twitter, the media opened up their borders briefly at the beginning of the decade to find new voices. A flood of hungry and angry radicals rushed in and, ironically, stole their jobs. I’d bet Democratic candidates wish the media would sort themselves out so they could just go back to knowing who’s in charge and doing what they’ve previously done—follow orders.