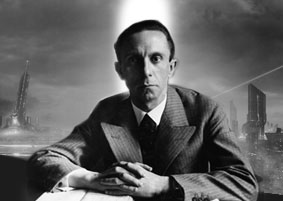 I realize receiving a letter from a time traveler can be confusing, and you may believe this is some kind of a prank. To verify my time-traveling skills, I have enclosed within this envelope a tuft of white hair from a man of African descent. It is yours and it’s from the floor of your favorite barbershop ten years from now, by which point you will appear to be much older than 61. Please have it carbon-dated after verifying the DNA. Shocking, yes?

I”m here to tell you something. In short: I am impressed.

As a propagandist, you have achieved everything I set out to do. You soared to victory this week like a Bundesadler in a Leni Riefenstahl film. I”m amazed der Juden and der junge are so devoted to your cause, as it seems you are determined to extinguish both. But what really impresses me is the blind faith with which more than half of America follows you. These are people who couldn”t care less about politics, yet somehow they are in a trance. Why? Because you promised them you care. Amazing. An entire generation of young men stand proudly behind you simply because you play basketball. And you”re not even good at it!

“You made politics about pop culture and fashion, and now the Dumb Community worships you.”

In New York, an American state that hasn”t voted for a Republican presidential candidate in almost 30 years, people flocked to the polls and insisted their friends do the same. I saw them tell their friends they felt “empowered” and that they were “real, true Americans.” When you won, New Yorkers all over the city cheered with glee despite having no idea about your policies. I asked many of them to distinguish between your opponent’s healthcare program and yours, and they had no idea. All they knew was their vote “made a difference” and “that’s what counts.” These are people with the math skills of a 12-year-old. You made an entire nation love you merely because you were black while claiming you were hated for precisely that reason. You are the most brilliant Negro I have ever seen.

After all but allowing an attack on your Libyan consulate you sent out a spokesperson denying such an event existed, and it worked. Instead of talking to world leaders you go on women’s talk shows. When unemployment soars, you say it would have gone much higher without you. You kill the space program and devote the resources to making Muslims feel better about themselves. MUSLIMS!? Isn”t America at war with a great number of them? You tell those disgusting Zionists to go back to the borders of nearly half a century ago and when they protest, you add that they must leave Iran alone. (This was my favorite part, BTW”I must have gone back and watched this 100 times.)

You convinced antiwar liberals that it’s OK to extend the Patriot Act AND do warrantless spying AND create a “kill list” AND conduct drone wars AND send a massive surge of new troops to Afghanistan AND keep Guantanamo despite promising the opposite. Then your propaganda machine convinces the country it’s your opponent who is the warmonger.

When you dig the deepest debt any president ever has, you say it had to be done. The nation’s young people will inherit this debt but you”ve convinced them that they don”t need to care. I”m about to go back in time and kill my kids, but you make me feel like a pussy. Imagine the Schadenfreude I feel when I hear adolescents call someone with twice as many Harvard degrees as you “stupid.” You control more young minds than that Ronald McDonald character.