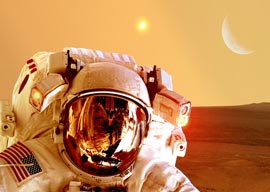 Last week, NASA confirmed that there is water on Mars. This could be some kind of cross-promotional hullabaloo for the movie The Martian, which came out this week, or it could mean there’s life on Mars. If it’s the latter, it behooves us to provide a welcome letter for Martians to get acquainted with our planet.

Welcome to America. We are members of a cultural group called “The West” and it’s generally understood the West is the best. America is known as the best of the best. We”re the ones who sent you the signal and it’s likely we”re the ones you”d most like to deal with from here on out. We”ve been sending out signals for a long time so we”re going to assume you”re at least partly familiar with our culture up until the end of the 20th century. There have been some drastic changes since then, however, and we will try to make them clear.

Virtually every industry of note in this country is still run by white males. These are the guys who sent you the message, for example. However, this group has fallen out of favor recently and is now called the patriarchy (the messages we sent you are now considered sexist and we”ve hired a woman to make sure we don”t mess up your planet). The guys who made us the best of the best are now considered the worst, and to facilitate this message, a massive information campaign has arisen that derides truth, logic, science, and math. In today’s America, up is down and right is wrong.

“Muslim kids wear NASA shirts now because NASA is no longer about the guys who sent you the signal. It’s about Muslim pride. I know, it’s weird.”

Three of the most revered women in the country right now, Caitlyn Jenner, Laverne Cox, and Janet Mock, are men. Gender is no longer a thing. We reward anyone who promotes this idea with, well, awards. Any show or movie that even alludes to transanything is showered with presents and all you have to do to win any competition is grow a beard and put on a dress. Ivy League schools have replaced the pronouns “he” and “she” with “ze,” “hir,” and “hirs” because “they literally don”t have any information” (oh, and “literally” doesn”t mean “literally” anymore”it means “not literally“). When doctors try to provide information and point out that gender dysphoria is a mental illness, they are seen as boring old fuddy-duddies. To quote a man who cut off his penis and balls, “It’s mostly the medical community who sees the sexes as male or female.” It’s now reasonable for little boys to take female hormones. They also may take hormone blockers that postpone puberty so their sex change will go smoother even though the suicide rate for post-op transsexuals is still very bad. The definition of child abuse keeps changing and if you”re not down with pedophiles, you”re a “monster.” Refusing to vaccinate your child is not child abuse and third-trimester abortions are nothing compared with a doctor who shot a lion.

When physicians spew hate facts such as it’s much harder to have a baby after 35 and nearly impossible after 40, they”re accused of sexism. About half a million Americans die of obesity every year but to be fat is to be healthy and to be fit is to starve yourself. To notice someone is fat is to hate women. If we want to know how men and women should properly interact, we ask a woman who is twice divorced by 30 and claims to be an “aspiring vegetarian.”

Race is also over. A prominent member of the NAACP was a white woman who put brown cream on her face and curled her hair. She’s transracial so she can do blackface but it’s still very much verboten in any other context. A prominent member of the Black Lives Matter movement is a white man who defines himself as black but refuses to wear any coloring cream. Oh, sorry, #BlackLivesMatter is a movement founded on the assumption that a guy had his hands up who didn”t, a man was choked to death who wasn”t, and a kid wasn”t attacking a man when he was. It’s funded by a Jewish billionaire whose agenda seems to be nothing more than wreaking havoc. Though gun violence is almost exclusively a black thing, it is portrayed as a white thing. If there’s a mass shooting, the shooter is a white supremacist until he’s black and then he’s a gun nut. Inanimate objects are now blamed for violence.

Though race is a social construct, it’s difficult to find something that isn”t racist. Neighborhoods are racist. The president is trying to force affluent white communities such as Connecticut to take in lots of poor blacks from the projects even though that area houses many middle-class blacks who moved there to get away from the projects. Everything Southern is racist. Lady Antebellum are one of the most popular musical groups in the country but using the word antebellum (which just means “pre”Civil War”) will likely get your company shut down. We are currently digging up the bones of anyone considered too antebellum. There’s also a motion to erase a gigantic statue called Stone Mountain, an act formerly considered a type of terrorism.

Abroad, things are much more confusing. We are at war with a nebulous enemy loosely defined as extremist Islam. They”re kind of like the Nazis in WWII and the moderate Muslims are kind of like Germans who didn”t support the Nazis. You may remember the internment camps we subjected German Americans to in the “30s and “40s. Today, we bend over backwards for Muslim Americans and if one of them brings a fake bomb to school, the president will tell him it’s “Cool.” Muslim kids wear NASA shirts now because NASA is no longer about the guys who sent you the signal. It’s about Muslim pride. I know, it’s weird.