Death of a Vulgarian 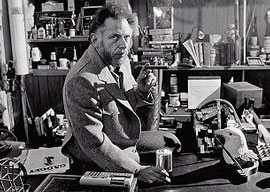 I met him once, and it was on a baseball diamond. Back in the 70s there was a regular softball competition in New York’s Central Park among magazines—many of them, such as LIFE and Look, are now gone. I played third base for Esquire, and as luck would have it we drew Screw in the first round. Word had got around that Screw would provide oral sex right at home plate to anyone on either side who hit a home run. Catching for Screw was an enormous bulldyke whom I noticed during the warm-up was throwing the ball like a man, and then some. My first two times up she yelled at the pitcher that “Sonny Boy here couldn’t hit the broad side of a barn” and other typical baseball barbs. I flied out deep my first two times at bat, then on my third time I got hold of one that fell between left and center. I flew around the bases, and approaching third I saw the coach holding up both hands signaling me to stop with a stand-up triple. But I had made my mind up and never broke stride. Heading for home I saw that the bulldyke had gone down on her knees with her shin guards blocking the plate. I was beaten by a mile.

“Al Goldstein certainly made the world a worse place, and perhaps that’s why he died broke and alone and miserable.”

In real baseball, the runner would barrel into the catcher at full speed, lowering his shoulder and aiming for the catcher’s head, often injuring the receiver and knocking the ball off him. (Major League Baseball is now trying to change the rule because of the injuries involved.) But this was a softball game in a joke of a league, and the catcher was a member of the weaker sex, her size and voice notwithstanding. So I did the gentlemanly thing—I slid into home plate and was tagged out. Both sides were laughing and booing me when Al Goldstein, non-playing captain, ran from the bench and screamed at me, “You didn’t want the blow job bad enough, you f—-!” Then he gave me the finger. I was already on the ground and stunned at his reaction. Then I burst into laughter, and that was the end of it. But I did notice the catcher wink at me. (We won, by the way, but never tested the home-run rule.) Mind you, had I scored, I never would have accepted the prize, certainly not in full view of everyone in Central Park. I may be many things, but a sexual exhibitionist I am not.

Why am I writing about a coarse pornographer such as Goldstein? Well, first and foremost he was extremely funny. He once offered a reward on national television—and produced a certified check of ten thousand dollars—for anyone who would shoot him dead if he ever married a Jewish woman again. He then produced a pistol to go along with the check and was thrown off the show.