Death Out of Season 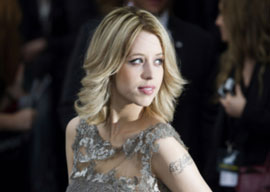 NEW YORK — The poet was right, April is the cruelest month. We at the Spectator lost Clarissa Tan, my good friend Bob Geldof’s 25-year-old daughter Peaches died, and my oldest friend from prep school buried his son, one of the greatest athletes of his time, at age 42. There is something obscene about surviving the young, something only politicians like Tony Blair can do and still smile, and A.E. Housman got it right in his “To An Athlete Dying Young.” We live in a culture awash in talk about happiness and the pursuit of it. Thousands of books are published about it every year. Arianna Huffington’s opus on how to thrive is number one on the best-seller list. (More about this later). Eliot also wrote that humankind could not bear very much reality, but is there anything more real than death?

I didn’t know Clarissa well, but whenever I met her at Speccie parties and pulled her leg about her teaching me strange Oriental sexual rituals she would crinkle up her face, blush, and laugh. She never once hinted that all was not well, that she was ill. Talk about profiles in courage. Bob Geldof’s Peaches I had met only at parties and she was swell. Friendly and very polite, she had her father’s nous, and that means she had a lot of brainpower. For those of us who know Bob Geldof well, he may use the F-word more than necessary at times, but he’s an extraordinary man. A rock star who neither drinks nor smokes, he’s a walking encyclopedia and has read more serious books than all the rock stars put together have had one-night stands. My heart goes out to him because he is a very loving father whose suffering the jackals of the tabloids cannot imagine as they circle for their story. The famed Band Aid and Live Aid organizer is a wonderful father, as he is a family man. He has endured a lot of personal grief and has endured it with dignity. Thank God for his wonderful French girlfriend, Jeanne Marine, and his other three daughters. His statement to the press was typical of Sir Bob: Writing “was” a beautiful child destroys me afresh.

“Eliot also wrote that humankind could not bear very much reality, but is there anything more real than death?”

Back in my old prep school, Blair Academy, in 1951 I became a star wrestler, a sport I had taken up at Lawrenceville before that wonderful school decided to throw me out for recalcitrance, a word I had never heard of when the school used it to explain to my father why I was being sent home. I had begun wrestling at 103 pounds and had gone slowly up to 141. When Tony Maltese arrived at Blair, wrestling at 141 also, the coach warned me to bulk up or diet down to 132. At sixteen years of age this is very hard to do. The reason for this was that Tony was undefeated when he arrived, and remained undefeated after three years of competition. He left school a state and national champion at 141. Poor little me had to starve myself or wrestle against bigger boys. If it weren’t for Tony, I coulda been a contender, I coulda been somebody. No matter, we have stayed friends throughout and now Tony and Cynthia, his wife of close to fifty years, have had to bury their son, a top skier who skied at pro level, a triathlete who also played in a band and whose doctor broke out in tears when he diagnosed him with brain cancer. Tony is a very rich man who does not show off. He has kept his emotions in check but I know the agony he’s going through. When we parted after graduating he chose to go to North Carolina because of its wrestling program. I also went south, to the University of Virginia for tennis. We have been much closer than brothers always. My own boy J.T. was heartbroken to hear about A.J.’s death, as our sons were friends and both used initials for their names.
Conveying the grief of a parent invariably sounds tinny, soggy, sentimental. But there are no euphemisms for it, no subtle ambiguities. Losing a son or daughter has to be the greatest fear of a human being and it never fails to send a shudder through my heart. The moment a child is born the parent becomes a hostage and it remains like that throughout. Suffering, it is said, gives people a more accurate sense of their own limitations. I am not so sure. I have always known my limitations, one of them being my incapability to secure my children’s well-being. Placing them in the hands of God can be a tricky business. The Almighty has taken some of the best and has left some of the worst around. Still, he has the last word and who am I to doubt him?
There is a lot of money to be made through the avoidance of unhappiness, and Arianna Stassinopoulos-Huffington is an expert at it. She has launched an argosy of press releases aimed at telling the world that power and money mean nothing to her. Does the Greek pudding really take all of us for totally stupid? She revels in high visibility with only the rich and famous, does not pay writers, has made a fortune with her noodle but also through marriage to a gay man, and now she tells us how to thrive. I am not about to read her book. I’ll stick with my memories of Clarissa, Peaches, and Tony’s boy.