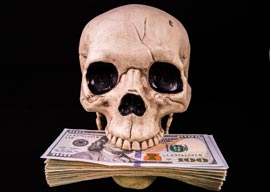 Looking at the Guardian website I noticed two instances of looseness almost straight away. The first was in an article reporting the death of a New York Times columnist, a man called David Carr, in the newspaper’s office. He was a man unknown to me, either personally or through his writing, though a passage of his work quoted in the Guardian‘s article, presumably selected as a representative sample of his style and wit, does not encourage me to read much further in his work:

If you”re gonna get a job that’s a little bit of a caper, that isn”t really a job, that under ideal circumstances you get to at least leave the building and leave your desktop, go out, find people more interesting than you, learn about something, come back and tell other people about it”that should be hard to get into. That should be hard to do. No wonder everybody’s lined up, trying to get into it. It beats working.

This is to writing what T-shirts are to dress: sloppy and inelegant. The style is not always the man himself, but it sometimes is.

“The economic worldview being promoted by the deliberate conflation of tax avoidance and tax evasion is that the first call on anyone’s money is that of the state.”

However, one does not expect elegance of the New York Times, a journal that somehow manages to combine the utmost dullness and earnestness with frivolity, and whose front page resembles a particularly verbose Victorian tombstone. Nor was it the example of the late Mr. Carr’s work that most exercised me: it was the first sentence of the article in the Guardian:

David Carr, a man who escaped the clutches of drug addiction to become the celebrated media columnist of the New York Times, has died after collapsing in his office at the age of 58.

The “clutches of drug addiction”: in other words, drug addiction is like, say, the Dormidera, the 80-foot-long anaconda for which Colonel Fawcett went searching in the jungles of South America, from whose mortal coils it was all but impossible to escape and which lay in wait for the unwary in the rivers and marshes of that continent.

Mr. Carr, apparently, had been a cocaine addict and dealer earlier in his life, but out of this nettle, addiction, he managed to pluck this flower, a regular column in the New York Times. But by the words “escaped the clutches” is really meant “decided to stop taking,” and good for him, say I, well done, though it was not so well done to have addicted himself in the first place. Addiction is not, except in very rare circumstances, something that happens to you, but something that you do; and if its “clutches” were really as the constriction of the Dormidera, very few indeed would escape. But in boring old fact this is not so.

In other words, addicts (because they are clutched rather than clutching) are a kind of protected species, protected, that is, from the reach of that most vicious of all human propensities”but one which is both inevitable and necessary”namely, the propensity to make moral judgement. Unlike, say, financiers or rapists, they know not what they do and therefore merit no reprehension. (In our sentimental world, reprehension is taken to be synonymous with the withdrawal of all sympathy or understanding.)

The second looseness of wording and thought manifested in the Guardian was in the use of the words “tax avoidance.” The newspaper has recently obtained much confidential documentation from the HSBC, and one of the accusations against the bank is that it “aggressively marketed tax-avoidance schemes” for its very rich customers. And soon the newspaper levied the accusation of tax avoidance at the leader of the British opposition Labour Party, Edward Miliband, who apparently had avoided inheritance duty on his parents” estates. Mr. Miliband, a man for whom I hold no brief, is reported as having defended himself thus:

Let me just say this: I paid tax as a result of that transaction. I”ve avoided no tax.