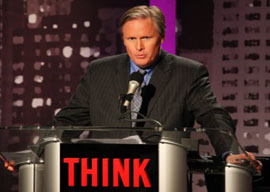 There was a good crowd at New York University Tuesday evening for the Intelligence Squared debate. These are full-dress formal disputations on topics of public interest, held roughly once a month through the season, very professionally organized and broadcast on Bloomberg TV and NPR.

Tuesday’s topic was “Don’t give us your tired, your poor, your huddled masses,” the reference being to Emma Lazarus’s poem on the Statue of Liberty. Some immigration-restrictionist friends invited me along and I wangled a press pass. (Regular tickets are $40″this is high-quality debating.)

Arguing for the motion”i.e., that we don’t want any more tired, poor, etc.”were ex-Congressman Tom Tancredo of Colorado and Kris Kobach, Kansas Secretary of State and coauthor of Arizona’s famous SB 1070 law aimed at illegal immigrants. On the other side were Tamar Jacoby, a veteran campaigner for liberal immigration laws, and San Antonio Mayor JuliÃ¡n Castro.

The audience’s temper made itself known right away as the moderator was introducing Kris. When he mentioned SB 1070, several people hissed. That’s New York for you: Liberalism Central. Kris took it in good humor; he’s fielded much worse.

“A sensible immigration policy would favor high-human-capital populations as being more likely to enrich the USA.”

Once underway, the debate worked over some well-trodden ground. None of us who are engaged with the issue heard anything new. Studies were quoted, numbers tossed back and forth: 25 percent of patent applications come from foreign-born persons (Jacoby); immigrant welfare usage is $140 billion net of taxes paid (Kobach).

If you know the territory it’s easy to spot the fudges and evasions employed by the immigration enthusiasts. Take that “25 percent,” for example. Duke University counted up the patent applications filed by immigrant non-citizens in the years 1998-2006, breaking them out by the applicant’s country of citizenship. The top twenty contributing countries were, in order: China (including Taiwan), India, Canada, UK, Germany, France, Russia, Korea, Japan, Australia, Italy, Israel, Netherlands, Switzerland, Spain, Sweden, Turkey, Ireland, Greece, and Iran. Not much of an argument there for mass immigration from Mexico and Central America, which is the mass immigration we’ve actually been getting.

We heard some well-worked but deceptive clichÃ©s, too. Under Ms. Jacoby’s amnesty plan, illegals will pay a fine, then get work authorization and “go to the back of the line” for citizenship.

In the first place, being already here, the legalized-illegals will inevitably be ahead of applicants patiently waiting in foreign countries, doing things the legal way.

In the second place, few illegals actually want full citizenship, which brings no real advantage over legal residence. They only want work authorization, which is what Ms. Jacoby just gave them. I have friends (British, Canadian) who have been living in the USA for decades as resident aliens. They see no point in taking up citizenship. All you get are the rights to vote and serve as president.

On the other side of the debate there were things unsaid because they are unsayable”to a considerable degree, unthinkable”under the prevailing taboo structure.