Decline of a Great Newspaper 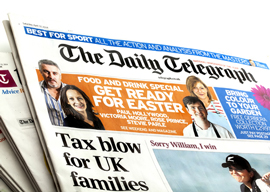 I maintain some vestigial links to the old country. Among them is the inclusion of the London Daily Telegraph in my morning trawl through the online news.

It’s sheer sentimentality on my part. The Telegraph was one of the first major outlets to publish me, back in the 1980s. At that time it was a robustly conservative newspaper with a core readership of farmers, retired Army officers, lower-upper-middle-class suburban wives, and the more thoughtful kind of stockbroker.

It catered, in other words, to people whose houses were likely to have names rather than numbers, a fact that inspired an entrant in one of the New Statesman competitions. The challenge in this particular competition was to provide suitable alternative second lines to famous first ones. One competitor took on Milton’s “Lycidas“:

Yet once more, O ye Laurels, and once more”¨
I place the Daily Telegraph beside your door.

Those days are long gone. The Telegraph, like everything else, has now been captured by the left, a fact this week’s editions illustrated twice over. They also offered some unusually revealing insights into the bizarro world of Cultural Marxism.

Monday’s Telegraph featured Tim Stanley, the guy who is so horrified by the idea that human nature might have anything at all to do with biology, he once asserted that lactose intolerance is a matter of “not liking milk.”

Tim’s Monday column was one of those both-parties-are awful pieces that foreign journalists extrude whenever there is a significant election in the U.S.A.

How, according to Tim, is the Republican Party awful?

Back in 2004, the Republicans were a big government conservative party that expanded healthcare spending and snagged 44 per cent of the Hispanic vote in the presidential election. Now they”re a band of white men who seem aggressively, jealously anti-everything, and utterly opposed to using government to help others.

Note how Tim, with all the research resources of a major newspaper to call on, recycles the apparently unkillable lie about George W. Bush getting 44 percent of the Hispanic vote in 2004. It was 40 percent, Tim.

Note also that the title to Tim’s piece includes the word “dream””nowadays a sure sign you will be reading CultMarx pap.

Dreaming is what vibrant, soulful, pitiable-yet-magical members of the legions of the oppressed do. Somali goatherds dream of escaping from corruption and homicidal warlords to Northern Europe. Guatemalan peasants dream of a carefree, industrious life in the U.S.A. (It would be shamefully unkind to think that legions in both categories are also dreaming of lush welfare benefits.)

Fifteen-year-old proto-feminists dream of crashing through the patriarchy’s glass ceiling to become CEO of Microsoft. Homosexuals dream of settling down as married (but not too married) couples. Black kids in American ghettos dream of careers in nuclear physics. You know how it goes.

I”m near the point now at which, when I hear the word “dream,” I reach for my Wilmot Robertson.

(What’s that you say? You”re dreaming of living under a government that cherishes national sovereignty, maintains demographic stability, defends its borders, strictly limits immigration, practices fiscal restraint, minds its own business abroad, and upholds traditional culture and the rule of law? Dream on, ya stinking Nazi.)

And then in Tuesday’s Daily Telegraph, Michael Deacon sounded off on a new reality-TV program over there, Making Leicester British.