Deep State of the Union 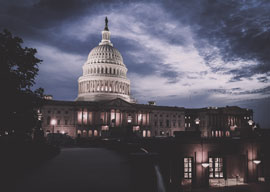 The 20th-century Turkish concept of a “deep state” first spread to other Mediterranean countries such as Italy, and is now slowly being picked up by American pundits. Ex”Republican congressional staffer Mike Lofgren’s 2016 book The Deep State: The Fall of the Constitution and the Rise of the Shadow Government offers a snarky and intelligent tour d”horizon of some of America’s more or less perpetual ruling organs.

The original Turkish version of the term is, of course, conspiratorial-minded: No matter who won the elections, the Kemalist military-intelligence complex would hold the ultimate veto. (To finally overcome the secularist deep state, Turkish Islamists built a parallel deep state in Turkey’s police forces via the Imam GÃ¼len’s stranglehold on, of all things, the test prep industry.)

Despite the origin of the phrase among conspiracy-loving Byzantines, Lofgren warns enthusiasts that the American deep state is more mundane:

Those who seek a grand conspiracy theory…will be disappointed. My analysis of the Deep State is not an exposÃ© of a secret, conspiratorial cabal. I use the term to mean a hybrid association of key elements of government and part of top-level finance and industry that is effectively able to govern the United States with only limited reference to the consent of the governed as normally expressed through elections.

The American deep state is less Oliver Stone’s JFK than The Office. Lofgren remarks upon “the sheer weight of its boring ordinariness once you have planted yourself in your office chair for the ten thousandth time.” It’s an emergent phenomenon of a quasi-empire run out of a wealthy and not exceptionally at-risk republic.

“The truth is that America is so rich it can more or less afford to waste vast amounts of money on F-35s and the like. So it does.”

The truth is that America is so rich it can more or less afford to waste vast amounts of money on F-35s and the like. So it does.

Traditionally, as in Steven Spielberg’s recent nostalgic movie Bridge of Spies about insurance lawyer James B. Donovan, who moonlit negotiating with the Soviets for the return of CIA pilot Francis Gary Powers, Washington tended to rely upon well-heeled amateurs. But the esoteric knowledge required for global adventuring leads to a perceived need for a standing army of full-time experts.

Over the decades, however, the idea of working for the government after you make your pile has reversed itself into government “service” as a prerequisite for a lucrative career in the private sector lobbying your former colleagues.

It’s not hard to notice that the deep state pays pretty well: A drive around the Washington, D.C., Beltway reveals the largest, most consistently upper-middle-class suburbs east of the San Francisco Bay. D.C.’s suburbs have been fairly wealthy at least since Pearl Harbor created the national security state. Charles Murray’s Coming Apart, for example, reports that back in 1960, Chevy Chase, Md., was the second-highest-income municipality in America, trailing only Beverly Hills.

But there wasn”t all that much to do economically in Washington back in the day. In 1985, the lady I worked for told me she”d grown up in Washington, D.C., where her father had owned a factory.

Over time, however, the ambitious realized the monetary value of face time in Washington, D.C., and much of corporate America has opened Beltway offices. For example, defense contractor Lockheed, where my father worked as an engineer for 40 years, had started with its executive suite, offices, and assembly lines at the airport in sunny Burbank, Calif. In 1988, though, Lockheed merged with a main competitor, Martin Marietta, and relocated its headquarters to Bethesda, Md., to more conveniently schmooze the brass and politicos.

But the financial windfall that befell the Beltway after it failed to anticipate 9/11 and got wrong Iraq’s WMD threat has kicked the region into the stratosphere. In the 2010 Census, the top four counties in the country in median household income were in Virginia (the traditionally Republican-leaning side of the Washington metropolis). In sixth place is Howard County, Md. (The only non-Beltway county to make the top half dozen is Los Alamos, N.M., which has its own deep-state ties.)

Lofgren’s version of the deep state consists of the usual suspects hiding in plain sight: the White House, the Pentagon, the CIA, the State Department, the Justice Department, the NSA, the small number of congressmen and staffers who involve themselves in foreign affairs, the Treasury and the Fed, defense industries, Beltway consulting firms, think tanks, plus affiliated interests on Wall Street and, more recently, Silicon Valley (as the partners of the NSA in data trawling).

Even this strikes me as a fairly limited list that could be extended to include more soft power fields. For example, the president’s anthropologist mother was a low-level apparatchik in America’s Cold War efforts to butter up Muslim countries, to display capitalism with a human face. Occasionally, she”d work directly for the government, as in her job at the U.S. embassy in Jakarta, but other times she”d be paid by the Ford Foundation or the East-West Center at the U. of Hawaii, which was founded by LBJ to compete with Moscow’s Patrice Lumumba U. for the loyalty of Third World students.

And then there’s the media. Except for a footnote explaining, “Beltway insiders regard the Post as “the CIA paper,”” The Deep State is light on how the evolution of access journalism has given sources back the upper hand over reporters.

Of course, America’s deep state is not notably competent. Its routine blunders suggest that “the shallow state” might be a more fitting moniker.

Mediocre competence should hardly be surprising in that one good question to ask yourself in determining whether you are employed in the deep state is whether you are more likely to be fired for being wrong or indiscreet.