Deeply Invested in the Middle East 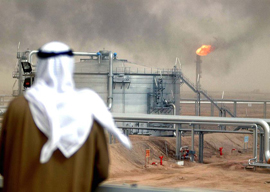 With the so-called Arab Spring still shaking the Middle East like an earthquake, I don”t doubt that reform is needed in that region. But America’s actions there are driven more by religion, oil, and election cycles than by humanitarian concerns.

We constantly hear the words “American interests” regarding the Middle East. If a regime’s interests coincide with America’s they are golden; if not, they should hunker down because Tomahawks may be headed their way. We keep hearing that “we are invested in what happens in the Middle East,” which is true, but the investment is more financial than emotional. Our leaders are constantly on the lookout for threats from abroad, with “threat” defined as anything that threatens Israel or Big Oil.”

Religion and oil”and seemingly nothing else”drive our foreign policy. As a predominantly Judeo-Christian nation it’s logical that America has hitched its wagon to the Star of David, but is it constitutional? The Jewish state is capable of self-defense and could nuke any neighbor that threatens it, which is a sad state of affairs for Israel and the world.

Government experts and policy wonks are constantly scanning the horizon for intelligence about which domino will fall next and what we can do to “manage the situation,” which is coded speech for interference. We keep putting corks on bottles of bad wine, but invariably the tops blow off. Luckily, we sided with the good guys from the Book of Revelation and everything will work out fine.

The president, with whom I disagree on domestic issues, may have the right instincts regarding international diplomacy, but he lacks the intestinal fortitude to stand up to AIPAC and the 700 Club. They question whether he’s a Christian or a Muslim and if he does not loudly answer he’s a Christian, his political career is over. His opponents know this and use it to batter him on foreign policy.