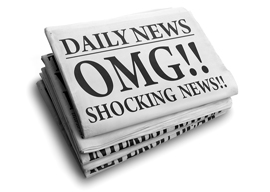 The hubbub surrounding last week’s announcement that “Underground Railroad” conductor Harriet Tubman would be movin” on up to the obverse of the twenty-dollar bill led me to flash back to how I first entered the world of professional blogging.

In an unlikely turn of events, I became a blogger because of an image of Michelle Obama Photoshopped to look like an ape.

The year was 2009, and conservatives were united as never before thanks to the election of the guy who was certainly, definitely, absolutely going to microchip us, put us in FEMA camps, and usher in the days of the Dark Overlords. One result of that unity, and the angry determination to fight back against Obama and his congressional “supermajority” (which never really came to pass because stupid ol” Ted Kennedy had to go get himself a brain tumor), was a gold rush of sorts in the world of conservative media. From Fox News to the Breitbart empire to small sites run by wannabe Jimmy Olsens, the glut of conservative blog sites was more than matched by a large and eager audience (Facebook’s skyrocketing popularity and the rise of Twitter certainly helped matters).

But I had no interest in being part of that world. I had always written for hard-copy, ink-and-paper “old media,” and I detested the idea of cramming myself into the clown car of conservative bloggers with their follow-the-leader sites that carry insipid titles straight out of the “how to name your right-wing blog for fun and profit” guidebook (just keep combining “free,” “freedom,” “patriot,” and “right” until you find a domain that’s still available from GoDaddy. Add “EndTheFed” if you”re a Ron Paul fan). But one hazy, drunken night in Vegas during the first meet-up of what would become my Republican Party Animals organization brought me into contact with John Romano, at the time Andrew Breitbart’s protÃ©gÃ© at Big Hollywood.

John was a whiz at understanding the blogging world, and he was restless and unhappy at Big Hollywood. He wanted to strike out on his own, and he knew from my track record as one of the few far-right guys to get published in the L.A. Times on racial matters like black-on-white crime that I could be a key element in his vision of a conservative site to rival everything the Breitbart empire had to offer. But I refused. I saw blogging as preaching to the converted, and worse, I saw it as a lot of hard work for little gain. Building a readership from scratch? Screw off”I only write for organs that already have an audience. But John wouldn”t give up. He explained that he was an autodidactic Internet genius with a gift for using backdoor machinations to increase visibility in the Google search engine, thus guaranteeing a large audience soon out of the gate, and he was willing to put his money where his mouth was.

But still I resisted.

“I don”t think the members of the mainstream press will stop for a moment to understand or admit their role in the sideshow.”

And then came “Ape Obama.” A controversy erupted in November 2009 when Google image searches of the president’s wife began displaying crude, racist depictions of her as various types of great ape as the top results. Liberals demanded that Google remove the offending images, but Google refused, admirably explaining that it would be unethical to interfere with or censor search results (remember those days? How things have changed). Romano wanted to prove a point to me, so he took one particularly odious image of the first lady, and he finagled things (don”t ask me how) so that the image on his site came up first in Google image searches of Mrs. Obama.

After a few weeks, he showed me the results in the old Technorati blog rankings (how I miss those). I was stunned. His site began shooting past dozens of older, more established conservative sites. Not because of in-depth or groundbreaking content, but because everyone who was spreading ape Michelle Obama images, and everyone who was outraged that everyone was spreading ape Michelle Obama images, was linking to Romano’s site. Over drinks one night at a local “ladies club,” Romano explained it to me: If you want a lot of hits, do porn. But if you want a lot of hits for a political site, you can be a good journalist all you want, but at the end of the day, it’s the inflammatory racial stuff that ups your numbers. That goes for the left as well as the right. Those standard-issue Salon pieces about how “whites are terrible” and “whites must die” and “kill the whites” probably get more views from conservatives expressing outrage than from leftists who get off on that garbage.

And the trick with the Michelle Obama image, the “get out of jail free” card, was to pretend that you”re only “teaching the controversy.” The Google search-results rumpus had made the cringe-inducing image newsworthy; all you needed to say is that you”re merely reporting the story, and how can you accurately report it without showing the image itself? As Romano wrote in a long-redacted piece, the offensive Michelle Obama image was “a sales gimmick and attention-getter, it’s working.”

I agreed to become editor and chief writer for his site because he”d convinced me he could deliver an audience by hook or crook while I could busy myself writing pieces that had substance. And even though the site is long dead and Romano has apparently reinvented himself as a lovable dad in TV commercials for companies like Liberty Mutual (I only know this because an eagle-eyed Taki’s reader brought it to my attention after I briefly dropped Romano’s name in a previous column), I never forgot those lessons.

So that brings us to Harriet Tubman and the twenty-dollar bill. Last week, Treasury Secretary Jack Lew announced that the gun-toting anti-Democrat would bump Andrew Jackson to the back of the bill (a small detail left out by many outraged pundits is that Jackson is not being dropped from the note, just sent on his own personal Trail of Tears to the other side). In response, quite a few (and I mean quite a few) angry forum and comment-section trolls declared their intent to deface the Tubman dubs as soon as they”re released into circulation (which won”t be until sometime after 2020). The ADL is already kvetching up a storm about the defacement plans, and a few enterprising Tubman foes have been circulating a post (unrelated to the Tubman matter) that claims to offer proof, from lawyers natch, that “stamping” U.S. currency is perfectly legal. Oh man, how Bernie Sanders, Elizabeth Warren, and Nancy Pelosi are probably going to regret posing for photos that apparently advocate the stamping of political messages on U.S. bills.

Of course, just as the trolls on the right are planning their Tubman-bill stamp-a-thons, the perpetually outraged SJWs on the left are (guess what) outraged over the notion, and they are (guess what again) calling on the government to change and tighten the laws regarding currency defacement. The truth is, everyone is looking forward to the upcoming plague of Tubman-note vandalization. Every incident in which an ape face is stamped over a Tubman twenty will be another autopilot homepage piece for Salon and the Huffington Post. And of course the Salon and HuffPo writers will be unable to report the story without adding something anti-conservative, anti-Republican, or anti-white, which will lead to hundreds of posts in the conservative and right-wing press expressing outrage at the outrage. Every troll caught in the act of defacing the bills will become a reviled Internet superstar, and plenty of “people of color” will deface the bills themselves in order to sue for emotional pain and suffering after claiming to have received the defaced note as change from a purchase or a withdrawal from an ATM. The government will gleefully rush in to pass new laws tightening the definition of what’s illegal under federal statute 18 USC § 333, and probably a tech firm or two will earn a tidy profit by creating new technology making it impossible to use defaced or slightly altered twenties in vending machines.

And the respectable members of the “legit” media? They”ll have the best time of all, as each new instance of defacement will be another opportunity to call for a “national dialogue on race,” and to encourage “soul-searching” on issues of “intolerance.” These journalists will get a great deal of mileage out of (here we go again) “teaching the controversy.” Once again, as always, we”ll see crude and hateful but essentially victimless acts of anti-minority racism given inflated importance on the national scene, while more serious examples of racial hatred, like black-on-white murders, will remain underreported (or unreported). Another disgruntled black man guns down his former co-workers? Bah, unimportant. Someone drew an ape face on a Tubman twenty? Preempt Wheel of Fortune; we go live in ten, nine, eight…