Defaming the Irish: If the Shoe Fits, Drink From It 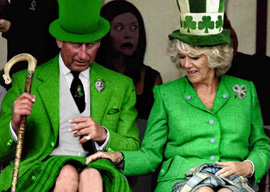 Prince Charles and the Duchess of Cornwall

Quickly lost among the other manufactured controversies earlier this month was a call among Irish American groups to boycott Urban Outfitters. The clothing chain’s sin was to unveil a line of St. Patrick’s Day T-shirts that rehashed the usual jokes about Irish drinking.

Perhaps to its credit, Urban Outfitters has offended a rainbow coalition of special-interest groups in recent years. Native Americans, gays, animal-rights activists, and even Miley Cyrus have all denounced the company over various perceived offenses.

Certainly, it’s hard to deny there is a double standard at work here. The Irish are fair game in polite society. I”ll bet a lorry full of soda bread that Urban Outfitters would not produce a T-shirt of a black watermelon-gobbling Sambo or a hook-nosed, gold-hoarding Jew. Public outcry would be too great in those cases.

“Celebrating St. Patrick’s Day with potatoes and whiskey is like celebrating Black History Month with watermelon and crack.”

But the fact is that drinking alcohol is a major part of Irish culture. Irish drinking was not an evil plot cooked up by Oliver Cromwell or an unfair smear pinned on us at Ellis Island. Like many ethnic stereotypes, it’s been earned.

The Irish often hold their most negative stereotypes as sources of pride. I was as guilty as anyone and acted as if not being drunk on St. Patrick’s Day was the Irish American equivalent of joining the Orangemen.

Alcohol and I went our separate ways a few years ago without any melodrama or religion. Many of my family members are also teetotalers, and we inhabit a netherworld of contradiction that includes blacks who hate fried chicken, spendthrift Jews, and Asians who are good drivers.

Celebrating St. Patrick’s Day with potatoes and whiskey is like celebrating Black History Month with watermelon and crack. But the fact remains that millions of Irish are drinking themselves into a stupor and vomiting green beer in the name of cultural pride.