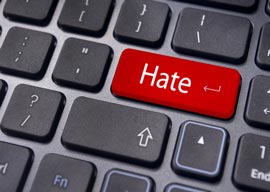 When four Soviet diplomats were captured by jihadis in Beirut in 1985, the Russians returned the favor by capturing, castrating, and butchering a close relative of a Hezbollah official. The KGB sent the organs to Hezbollah and promised there would be similar attacks unless their diplomats were returned. They were promptly released. The only way to defeat terrorist organizations is to increase their costs. So, too, with Gawker, the gossip-mongering website founded by Nick Denton, a former Economist journalist”turned”enforcer for the New York media elite.

While Gawker Media pretends to be a journalist outfit, it is, in fact, a terrorist organization. Its weapon of choice is whipping up the social justice mob to destroy people’s livelihoods. Of course, Gawker doesn”t think of itself as a terrorist organization any more than the hippies in the Stanford prison experiment thought of themselves as rage-driven thugs. But in practice, being a social justice warrior means being an antisocial unjust coward. In the good old days we”d settle these disputes with dueling, or perhaps trial by combat, but now we have to use the courts. A pity.

“Gawker’s weapon of choice is whipping up the social justice mob to destroy people’s livelihoods.”

The list of people who should sue Gawker is growing. Gawker’s employees are running for the exits, too, since the gay outing and blackmail story. If more than eight employees leave Gawker, does it become a transjournalist outfit?

The ad-driven Gawker writers don”t care if something is true or false; they just care about the page views above all else. This is ultimately why Gawker’s efforts to be 20% nicer will fail: Hate clicks drive page views, which get meager amounts of profit. Indeed, a “hate click is just as valuable as a love click,” says plagiarist Benny Johnson, the “content director” of the cuckservative IJReview.com. Being fooled by its anonymous sources, then, isn”t a mistake; it’s a feature of the page-view news economy where the poorly paid, mostly white, Ivy League-educated liberal arts majors whore themselves out for advertising dollars. Denton isn”t so much an editor who mentors young writers on their way but a click-baiting pimp who keeps scrupulous track of how much money his staff brings in.