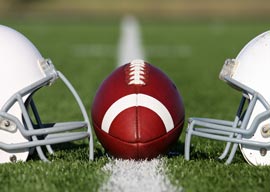 With identity politics and their accompanying political correctness in the news (as usual), it’s worth considering how similar human urges play out in the world of sports.

If Congressional politics is notoriously show biz for the ugly, then identity politics is athletics for the clumsy.

Identity politics exist because demographic identity is important. It’s impossible to eliminate identity politics, but it is feasible to level the playing field by denying any sacralized group the rhetorical privilege of engaging in the arena of public debate without anybody else being allowed to criticize them.

The goal of exercises in identity politics is the same one that’s featured in the classic intro to ABC’s Wide World of Sports a half-century ago: “the thrill of victory.”

At the climax of Orwell’s 1984, Inner Party member O”Brien explains to Winston Smith the long-term purpose of the enormous apparatus for purging dissidents:

The National Football League makes its money largely by eliciting identity emotions, offering the chance for the thrill of victory along regional lines.

“By contrast, political correctness struggles are all about rigging debates by ruling out opponents” best arguments ahead of time.”

The trash-talking Seattle Seahawks have an especially black image, while the New England Patriots have forged a modest crypto-white identity by specializing in signing overlooked white players such as Julian Edelman, who caught the winning touchdown pass in Sunday’s Super Bowl. Because the Patriots have been so good for so long (quarterback Tom Brady has a win-loss record of 181-55 going back to 2001), they consistently get late-round picks in the NFL draft. One way that cunning coach Bill Belichick replenishes his ranks is to not fall for football’s mild prejudice against white players.

Occasionally, two professional teams will share a regional identity, and thus be forced to differentiate themselves over personality traits. In Los Angeles, the NBA’s Clippers have traditionally drawn those fans who value underdogs and saving money on NBA tickets, while the Los Angeles Lakers appealed to Angelenos who identify with fame, success, money, and popularity. (Not surprisingly, the Lakers have typically been vastly more popular in L.A.)

But the bread and butter of the NFL is stirring up localist passions. Football is a war game in which your village sends its brave young men into battle with the other village. You identify with your locale’s designated representatives (even if they”re only renting a place out by the airport because they”ll be playing for somebody else next year) and pay to root them on.

A crucial distinction between identity politics and policy politics is that the former is less subject to the law of diminishing returns.

With policies that are intended to solve real problems, diminishing returns are inevitable. Occasionally, politicians even declare victory and go home. For example, the Republicans came to power in 1980, intent upon boosting military spending to top the Soviets. While immensely expensive, this worked so well that at the end of 1991 the Soviet Union went out of business. Defense Secretary Dick Cheney then sharply downsized the U.S. military in 1992, providing a long-dreamt-of peace dividend.

But in contemporary identity politics struggles, victory encourages more demands. Similarly, the New England Patriots have won four Super Bowls with Tom Brady, but that only makes their fan base more ardent. In a who-whom world, there are increasing returns to winning as more marginal fans jump on the bandwagon and old-timers have their expectations raised. “Americans love a winner,” as General Patton observed.

Losing, by contrast, typically makes people affiliate less strongly with a particular identity. If the Pats ever relapse to mediocrity, Bostonians have plenty of other sports team options for exercising their tribal passions.

Of course, this fluidity of interest is feasible because both spectator sports and contemporary identity politics aren”t all that important in a substantive sense. If the NFL were a real war and the winning city got to sack the losing cities, then the side in danger of defeat would bond together desperately, causing diminishing returns for the heretofore winners. New Englanders might have contented themselves with merely pillaging, say, Baltimore and Indianapolis, while their desire to loot distant Seattle would have been less pressing.