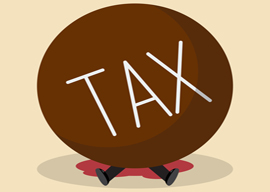 Of all the unproductive and pernicious taxes, I”ve long regarded the estate tax as the most antithetical to a just society. To work your entire life and pass on your earnings to your next of kin is the thrust of civilization. Without it, we putter out and are forced to start again at square one, like an existential Groundhog Day.

The inheritance tax rewards the present over the past by punishing the leaving of a bequest for the future. Ben Franklin, of course, said that death and taxes are the only certainties we know. The levy on inheritance guarantees that even death can”t escape taxes.

Punishing as it is, the inheritance tax is just a tax, a one-time stripping of earned value. That’s insufficient for Vassar College professor Barry Lam. In a recent Aeon commentary, Lam pushes for something more than economic confiscation of one’s legacy. He asks for a great forgetting.

Lam laments that “trillions of dollars” are dedicated to “executing the wishes of wealthy people who died long ago.” This wealth, he writes, should be used to relieve the “current state of wealth inequality.” Should we continue our current practice of paying out the wills of the deceased, it “could result in a future economy that will reflect the preferences of a past aristocracy, rather than the majority of those living.”

“Ideas about what is good to do in the world ought to change with the changing conditions of the world,” Lam proposes. It’s high time we forget about that old, dusty past, and focus our sights on the here and now. That means a cessation of all inheritance paid to legatees. We have no reason to give deference to those “no longer around to know about the world, and who cannot be harmed or benefited any longer from such spending.”

“If the idea of ignoring the final wishes of the deceased sounds horrendous, that’s because it is.”

If the idea of ignoring the final wishes of the deceased sounds horrendous, that’s because it is. Lam knows our intuitive moral sense beseeches us to award the dead with “eternal rights.” Yet he calls it “vanity and narcissism” to hope that our requests are honored after our death.

Lam’s idea, like most ideas holed up in academia, are a radical departure from convention. They represent a rosy progressive vision of a better future, unshackled from the prejudices and blemishes of the past. To delink from history and start anew is the goal of liberalism qua liberalism. The past is a weight that grounds the future. The sooner we shrug off that weight, the sooner we reach perfect freedom.

It is in our inheritance laws that we acknowledge the gravity put upon us by our parents and ancestors. Lam wants to banish that intertemporal force, snapping history’s chains. In doing so, he belies the real narcissism at work: the cult of the current self.

In his book Keeping Things Close: Essays on the Conservative Disposition, Peter King describes thinkers like Lam as adherents of the rhizome concept of being. First developed by French philosophers Gilles Deleuze and FÃ©lix Guattari, the rhizome refers to a decentralized system lacking core stability. Conceptually, it is diametrically opposed to rootedness. The rhizome is supposed to stress “connectivity and flexibility” and has “no determinate form.”

Deleuze and Guattari note in their book A Thousand Plateaus: Capitalism and Schizophrenia that in the rhizome system “all individuals are interchangeable, defined only by their state at a given moment” and that it “has neither beginning nor end.”

Certainly, in a rhizome-type world, there would be no obligation to fulfill the will of the dead. There would be no demand to preserve one’s birthright. The family structure would not exist. No roots means no lasting bonds. The rhizome world is one of free, malleable human beings, liberated from the duties of old.

If Lam’s proposal were the product of a mad scribbler cloistered alone in his university office for too long, it wouldn”t be an issue. But, increasingly, the present-focused mindset is being adopted. More and more, our culture celebrates devotion to self and “living in the moment.” And the trend is far from new.