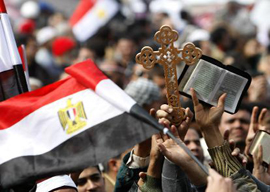 If the Arab Spring is good for democracy, then it has to be good for diversity, right? We know that democracy and diversity are virtually the same thing: Both words begin with a “d,” end with a “y,” and by definition are good. Who isn’t aware that minority protection (indeed, minority promotion) is the essence of majority rule?

American intellectuals are confident of this because the Nazis were against democracy and diversity. And if you’ve heard of Hitler, what more do you need to know about history?

Yet some people who don’t seem to have gotten this message are the Arab majorities themselves, who subscribe to the primitive, even (dare I say it?) populist notion that majority rule means rule by the majority. And majorities in Third World countries are generally not urbane sophisticates.

For example, when Egyptians finally cast a semi-meaningful ballot after decades under Hosni Mubarak’s increasingly senescent but largely secular and modernist dictatorship, over 70% of the seats went to Islamist parties.

“If the Arab Spring amounts to anything, it will likely be the end of Arab Christianity via ethnic cleansing.”

Democracy is unlikely to be good for Egypt’s millions of Coptic Christians. If the Arab Spring amounts to anything, it will likely be the end of Arab Christianity via ethnic cleansing.

The general pattern has been that the old-line dictators in most countries vulnerable to Arab Spring uprisings emerged from modernizing minorities (whether ethnic, religious, class, regional, ideological, or occupational). The pitchfork-wielding peasants resent both the elite minorities and the backward minorities.

Some dictators even imported more diversity to stay in power. Both Libya and Bahrain used immigration to bulk up their mercenaries: sub-Saharan Africans in Col. Gaddafi’s Libya and foreign Sunni soldiers and cops to keep down Bahrain’s Shi’ite majority. The bumptious Col. Gaddafi is gone, but Bahrain’s slick Al Khalifa dynasty is still there, backed by the Saudis and the Americans. Bahrain’s bosses understand modern symbolism about minorities so well that the Arab kingdom’s ambassador to Washington is a Jewish woman.

Elderly and corrupt dictators tend to be accommodating toward minorities, especially “market dominant minorities” that are better with money than with guns, as Tiger Mother Amy Chua pointed out in her 2002 book World on Fire. For example, the overseas Chinese flourished in General Suharto’s dictatorial Indonesia until the mostly Muslim indigenous majority ran amok in 1998 and many Chinese fled to Singapore.

The Middle East might seem like a place where there aren’t enough minorities to be worrisome. Yet as the world’s oldest agricultural region, it is less monolithically Muslim than it appears. Like an archeological dig, there are layers upon layers of cultures, from pre-Islamic groups to modernizing minorities.