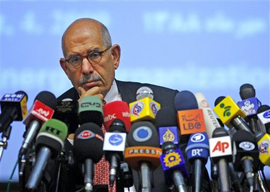 “Right now, socially, we are disintegrating.”

So says Mohamed ElBaradei, former head of the International Atomic Energy Agency and potential candidate for president of Egypt.

Since the heady days of Tahrir Square, Salafis have been killing Christians. Churches have been destroyed. Gangs have conducted mass prison breaks. The Muslim Brotherhood brims with confidence.

And demands are rising for the prosecution and execution of former president Hosni Mubarak.

“People do not feel secure,” says ElBaradei, “They are buying guns.” And as Anthony Shadid and David Kirkpatrick of The New York Times write, it is not only Egypt’s future that is in doubt.

“(I)n the past weeks, the specter of divisions—religion in Egypt, fundamentalism in Tunisia, sect in Syria and Bahrain, clan in Libya—has threatened uprisings that once seemed to promise to resolve questions that have vexed the Arab world since the colonialism era.”

“People do not seem to seek equality with other cultures, faiths and tribes, but a separate existence in nations that are of, by and for themselves alone.”

Can the Arab revolts cope with “the cacophony of diversity … the Arab world’s variety of clans, sects, ethnicities and religions?”

Or will we witness the disintegration of nations like Libya, Syria, Iraq and Yemen, as we did Ethiopia and the Sudan—and of African, Latin American, Asian and European nations, as well?

With the end of the Cold War in 1991, it seemed the world was moving toward unity. The post-Cold War era saw the expansion of the European Union, NAFTA and GATT, the creation of a World Trade Organization, the Rome Treaty for the prosecution of war crimes, the Kyoto Protocol, and the G-7 expand to the G-8 and then to the G-20.

Nations seemed to be coming together to solve global problems.

Is the future more likely to bring deepening global integration, or continued disintegration, as we saw with the collapse and breakup of Czechoslovakia, the Soviet Union and Yugoslavia into 24 nations, separated along the lines of ethnicity, culture and faith?

What America has on offer to the world is democratic pluralism.

Unlike the Founding Fathers and every generation before 1960, all of which sought to keep us European and Christian, we declare to the world that diversity—religious, racial, ethnic, cultural, the more the better—is now the American ideal.

In 1960, 97 percent of all Americans spoke English. Today, we take pride in the fact that Americans speak hundreds of languages.