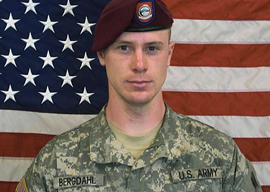 It is so easy to gull the pack, the herd. It just takes a bit of theater. A brass band on the Fourth of July, flags whipping in the wind, young soldiers marching down Main Street, rhythmic thump-thump-thump of boots. There comes that glorious sense of common purpose, the adrenal thrill of collective power, thump-thump-thump. Martial ceremony is heady stuff, appealing to things deep and limbic. When Johnny comes marching home again, hurrah, hurrah. We are all together now, made whole, no petty divisions. The fanged herd.

For the seniors, next year is Afghanistan. Johnny comes rolling home again, hurrah, hurrah, minus his legs. From this we avert our eyes.

“People are squeamish these days, so we hide the horror of what we do. The public might gag and say, “No. No more.” Besides, we do not want to discourage recruiting.”

The herd. In a thousand American Legion halls across the nation, veterans gather on Memorial Day to make patriotic speeches. There are clichÃ©s about the ultimate sacrifice, defending our freedoms, God, duty, and country, our American way of life. Legionnaires are friendly, decent people, well-meaning”now, anyway. If there were an earthquake, they would pull the wounded from the rubble until they dropped from fatigue. They are not complex. They listen to the patriotic speeches with a sense of being a band of brothers. And if you told them they were suckers, conned by experts, used, they would erupt in fury, because somewhere inside many have suspected it.

The herd. The pack. Whip “em up. It’s for God, for democracy, onward, Christian soldiers. We are a light to the world, a shining city on a hill, what all the earth would like to be if only they shared our values. We, knights in armor in a savage land, we fight fascism, Nazis, terror, Islam, it doesn”t matter what, as we can always find something to fight, some sanctifying evil.

We are very like our enemies. We do not notice this. Carefully, we do not notice. Guernica, the Warsaw ghetto, Fallujah, Nanjing, Dresden”they are all the same. Soldiers are all the same, wars the same. All are fought on the most irreproachable moral grounds. We fight for peace, for freedom, for Allah, for the Fatherland, the Motherland, for the homeland, for white Christian motherhood. We do not fight for Lockheed Martin, or for oil. Oh no. Even the suckers might revolt at dying for low-sulfur crude, or Caspian pipelines.

People are squeamish these days, so we hide the horror of what we do. The public might gag and say, “No. No more.” Besides, we do not want to discourage recruiting. In our Fallujahs we do not show the rotting corpses, or footage of the disemboweled as they try to crawl, god knows to where, while they bleed to death.

And we do not show Johnny with his new colostomy bag, or blind, or with three stumps and one partial arm, or paraplegic, or, never, ever, the quads, paralyzed below the neck, lying on slabs, turned over from time to time to avoid bedsores. The public does not see”though I have seen”the 17-year-old sweetheart of the young Marine from Memphis, when she first sees her betrothed irremediably blind with half his face a hideous mass of mangled flesh”and her obvious thought: Oh Jesus, Johnny, oh Johnny, how can I do this? Onward, Christian soldiers.

In my day we girded our loins against the Soviet Union, the Evil Empire, that spied on its citizens, tortured people it didn”t like, and committed atrocities in Afghanistan, where it had no business being. We loved the Afghans. We wanted to save them from the godless communist invaders.

To protect people from communism, we killed millions of them, only incidentally making McDonnell Douglas rich. Today we spread a swath of destruction across the planet, this time protecting people from terror by murdering them with drones.