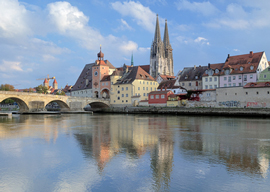 Boo to the C.I.A.! It got caught spying on Germany and its top man in Berlin has been sent home. What I”d like to know is, what’s so important about Berlin’s open-book policies that we had to play dirty with them? Maybe our ex-top man in the German capital should now concentrate on weeding out Israeli spies in Washington. It would make more sense, as Israel does spy on its benefactor, protector, and major ally, whereas Germany does not. Actually, spying on Germany does smack of arrogance and disrespect. Germany no longer has a Gestapo nor a Stasi, is deeply antimilitaristic, and”yes”a growing anti-Americanism is taking place but for all the right reasons: America’s post-9/11 sojourn into the Mideast and the disasters that followed the Cheney-Rumsfeld efforts to play Alexander the Great.

Germans today are not the ones Hollywood so easily portrays as goose-stepping, Nazi-loving, Jew-hating villains. Actually, and this will not make me very popular, they never were. My aunt by marriage Princess Lily Schoenburg lost her six sons on the Russian front, where they were dispatched as cannon fodder for being aristocrats. Hitler and the Nazis were loathed by the upper and educated classes; tolerated, once war was declared, by the middle class, as it had no other choice”and only a small, twisted number of Germans remained ardent Nazis after it became clear that Hitler was leading the nation to disaster. Hitler and the Nazis brought law and order to a seething Germany in 1933 and also put most Germans to work. Nazism held sway for 12 years and it has been dead and deeply buried since 1945. The rest is all bullshit made up by Hollywood and sensation-seeking newspapers, as ridiculous as the Hitler sightings in South America.

“Germans today are not the ones Hollywood so easily portrays as goose-stepping, Nazi-loving, Jew-hating villains. Actually, and this will not make me very popular, they never were.”

What the C.I.A. needs to do is stop wasting its time, energy, and money spying on Germans. A deeply ingrained antimilitarism after having lost two world wars, the first of which Germany did not initiate, is as German as hasenpfeffer, and Germans are not willing participants in America’s spy games. They are law abiders, not willing to play dirty games now that the Cold War is truly over, and they definitely do not want to be Washington’s patsies in the new war against radical Islam. In fact, Uncle Sam could learn a trick or two from Uncle Heinrich in keeping above the fray. But with AIPAC busy stirring up trouble, I”m just whistling Dixie.

Last month Germany exhibited the skill and efficiency of its soccer team when it humbled Brazil and outplayed Argentina to win the World Cup. France fielded a team of mostly African Frenchmen, but to no avail. The Germans mowed them down in a manner reminiscent of 1871, when Bismarck had his troops march down the Champs-ÃlysÃ©es to show the frogs who was the boss. America has to learn to love the Germans, not spy on them, and even Hollywood needs to change its tune. There is no better and more pleasant place to live than in Germany, as long as one keeps away from busy ports like Hamburg and Muslim-infested cities like Frankfurt. Five years ago I was in Regensburg, in Bavaria, walking along the Danube with Prince Heinrich von FÃ¼rstenberg, in whose lands the great river actually begins to flow. The scene was straight out of those black-and-white films of prewar vintage. Blonde girls lined the banks sunning themselves, while tanned young men showed off their physiques to them. Older burghers picnicked with their wives and drank beer. Wonderful oompah bands played old tunes. “Did you set all this up?” I asked Heinrich. I toured the castles and swam in the lakes and dined in Berlin, a modern, wonderful, art-filled city, with its nearby Potsdam Palace, the Prussian jewel that now houses Brandenburg’s government. The people were friendly and handsome, except for the Turkish and Arab quarters where the Muslims with the highest birth rate by far continue to remain apart from the German way of life.

Writing this made me think of the Sullivan Brothers, all five brave boys who went down with their ship in World War II. Hollywood made a movie of their life and Washington named two destroyers after them. As well it should have. No film has been made about the six Schoenburg brothers who died in Russia, nor of the three von BlÃ¼cher brothers that died in the airborne attack in Crete, May 1941. Their ancestor, Marshal BlÃ¼cher, was the real winner on June 18, 1815, when his seven in the evening charge won the day for the allies against Napoleon. (Typically, Wellington claimed to be the victor.) Prince Heinrich Wittgenstein, a top German ace, was still defending the fatherland against impossible odds when he was shot down six months before the war ended. Inside his flight suit, legend says, he was wearing a dinner jacket. Maybe Spielberg should lay off the fictional Private Ryan and concentrate on the real princes like those above. Let’s celebrate princes for a change, and learn to love Germany.